Chuck Yeager, Now 93, Gets Into Scuffle With Some Brits On Twitter 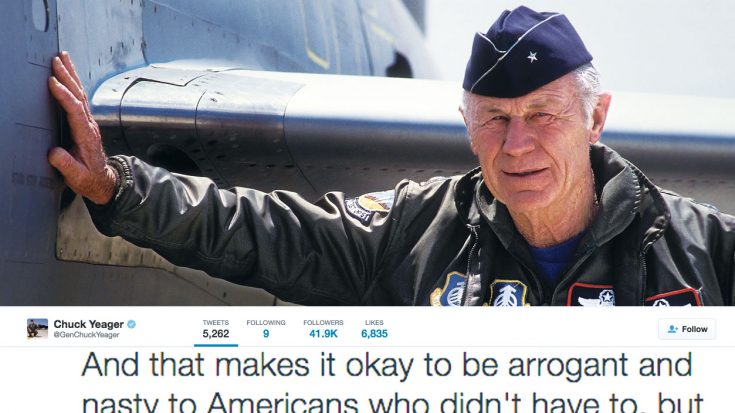 In Case You Needed Another Reason To Love This Guy.

We hope that all of you folks know who Chuck Yeager is. You are after all fans of World War II planes. If for some reason this name escaped you, we’ll give you some really quick facts about this truly awesome person and gifted aviator.

Chuck Yeager. Born in 1923 in West Virginia. At 19 he joined the fight and became a P-51 Mustang fighter pilot during World War II. He was the first one in his squadron to make “ace-in-a-day.” That means exactly what it sounds like. By the end of the war, he accumulated 11.5 kills including two Me-262s. He’s famous for saying, “The first time I saw a jet, I shot it down.”

After the war Yeager became a test pilot for many years and as such became the first human to break the sound barrier in the Bell X-1. As a fun side note, the last time he broke the sound barrier was last year, when he flew in an F-16 at the tender age of 92. The guy’s a legend is what we’re getting at here.

No add to his great character, he won yet another fight a couple of days ago. This time it was on Twitter (how many 94 year olds do you know who have Twitter by the way), and he gave people the same treatment he did during his ace days. Straight, to the point and for the win.

The whole fiasco started when some British lad started saying that the U.S. stole their plans for the Bell X-1. Then the conversation broke down from there.  Some people went hard on him and he didn’t hold back.

Here are his Tweets which display exactly what he thinks about them in general:

If you don’t follow him on Twitter by the way, you should. He’s actually very responsive on it, so you can ask him a question and you’re likely to get an answer from him. How great is that? Here’s the link if you want to follow him.