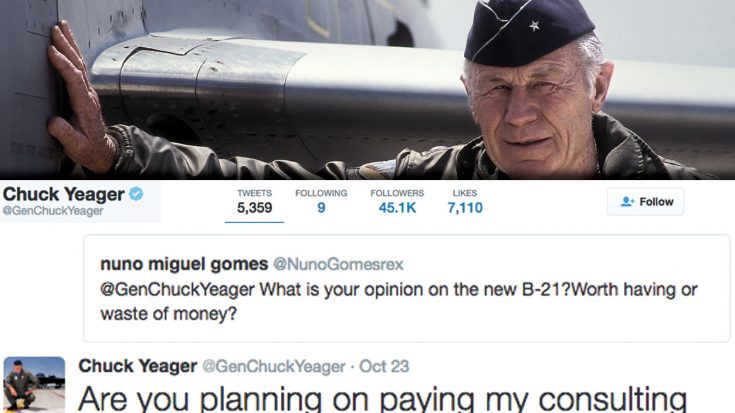 If You Don’t Follow Him, Start Immediately Or You’ll Miss Out.

Let’s start off with just a simple remark. How many 93 year olds do you know? Probably not many.

Now, out of those, how many are on Twitter? Most likely around zero of them.

There is one person however that is 93 and on Twitter and to top it off, he’s also extremely funny if not downright brutal sometimes. His name is Chuck Yeager.

We’re sure all of you know who Chuck Yeager is, but if for some reason this aviation legend escaped you, let us give you a quick rundown here.

Chuck Yeager was born in West Virginia in 1923. At the tender age of 19 he enlisted and be a P-51 fighter pilot. He became and ace and is known for shooting down the first operational fighter jet; the Me 262. After the war he became a test pilot and then became the first person to fly faster than the speed of sound. A few years later he set a world record for hitting Mach 2.44 and become the second person to fly twice the speed of sound. His entire life revolved around flying even to this day. Just last year he hopped in the back of an F-16 and hit Mach 1. He was 92.

Now that you’ve got the basics down, let’s go back to his twitter account. He might be 93 but he’s as sharp as ever. The cool thing is that if you love warbirds (we know you do) you can hop on Twitter and ask him a question. He typically responds pretty quickly.

Some people however, found out the hard way not to ask him stupid questions. Here are some of our favorites.

^Let’s start off with an anecdote about a heated subject. Although we might not agree with him (or do we?), here’s a straight forward answer about the F-35 from a guy that spent his life in aviation. Considering he’s been a test pilot for a significant amount of years, we do have to admit he knows what he’s talking about.

^Here he patronizes a young lad a bit. Asking about what autopilot actually does, Yeager just told him to join up. Wonder if he gets commission for signing people up.

^Let’s step back to his prop flying days. Known for being quite the hunter behind the stick, he makes a light joke about his favorite plane. Simply put, not the one that kills him but the other guy.

^Now here’s some wit. Someone came at Chuck with a snarky, funny question. His response is priceless. Wonder if he gets a kick out of this like we do. We’d like to think he does. 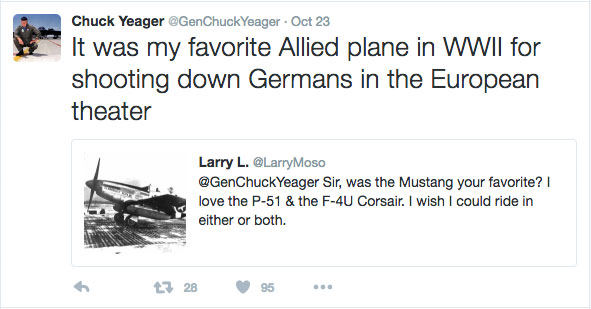 ^C’mon! “Favorite plane to shoot down Germans?” This guy should have been a comedian.

^You know the SR-71 Blackbird? The one that flew over 2,000 mph? The plane is iconic to this day and has reached feats no other planes had. When asked about it, Chuck dismissed it with a written shrug of the shoulders type of deal. Like…whatever, it’s just a plane. 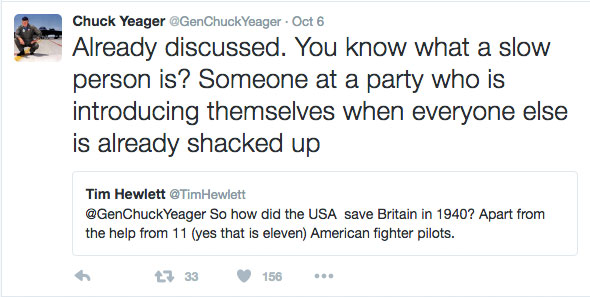 ^This one is our favorite. We actually did a whole separate post about this incident. The bottom line is that some British lads started mouthing off about the United States only “helping” them after Pear Harbor. Otherwise, we’d never do anything. After this went back and forth for a while and with multiple people chiming in, Chuck closed down the thread with this statement. We’ve never hear or read such a clever way of calling someone stupid. Well done Chuck. Still shooting people down.

^You know what makes people the best at what they do? This type of attitude. Why would you think about anything else if you’re the one doing all the shooting down. Duh.

^This guy’s not even afraid of death it seems. That would make sense, as he’s done some crazy dangerous things throughout his life. From getting shot at during World War II to getting into the Bell X-1 which had the potential of being torn into pieces, Chuck just goes for it. Death? Whatever. Who cares?

^Now this is one of our favorites. 93 and still thinking about that rather than what he’s done in the past. Although being the first person to break the sound barrier has literally nothing to do with getting some, he made the connection. And we love him for that.

^This is the most hilarious one in our opinion. Someone was trying to be cute and send him a picture of his little kid. What advice can you give her? Chuck doesn’t do cute, so he gave it to the guy straight. Not my kid, not my problem. Although he might have meant it in a nice way in, it came off pretty funny in an almost rude way. Gotta love it.