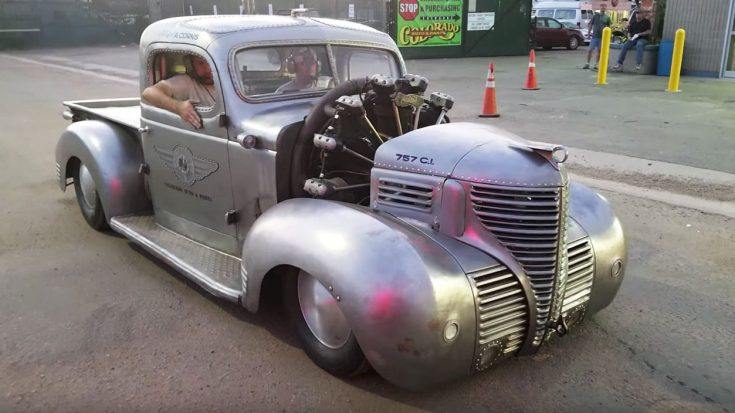 As warbird fans, most of you appreciate the sound of the all too familiar radial engine. It’s rough, it’s throaty and you lift your head skyward every time you hear it.

Well, in this case, you’ll have to keep your eyes street-level.

Adam Corns, the mastermind behind this beauty, was fascinated with aircraft from an early age. His parents wanted to support his passion and booked him a flight in a stunt plane for his 13th birthday, but that nearly ended with a tragedy. The plane clipped power lines and crashed, Corns emerging miraculously unscathed. This experience, however, made him focus on vehicles on the ground and forget his passion for things that fly.

Crons attached a belt to where the propeller would normally go which is then attached to a gearbox working the driveshaft.

Learning to work on cars and eventually picking up the project you’ll see below, he decided to combine his two passions, the end result being this ’39 pickup. It’s the only one of its kind in the world.

He bought it from a customer who used his garage for chump change as it was completely rusted out, but as you’ll see, put a lot of love and care into making it what it now is. Take special note of the aircraft-inspired rivets lining the outside metal.

The radial came from his father who saw a ’50s plane in a junkyard and instinctually loaded it up on his trailer. After all was said and done, this R-755-A2 Jacobs radial fired up without a hitch and is now the 300 horsepower beast that powers this truck.

All in all, this build is one of the finest we’ve seen in a while.

Here’s A Clean And Crisp Walkaround

Ever seen a airplane engine powered pickup? Now you have! This is a '39 Plymouth pickup with a 7 cylinder Jacobs engine out of a 1950's sea plane. Built by Gary Corns from Englewood, CO. #KNSEMA

And Here’s This Beast Coming To Life