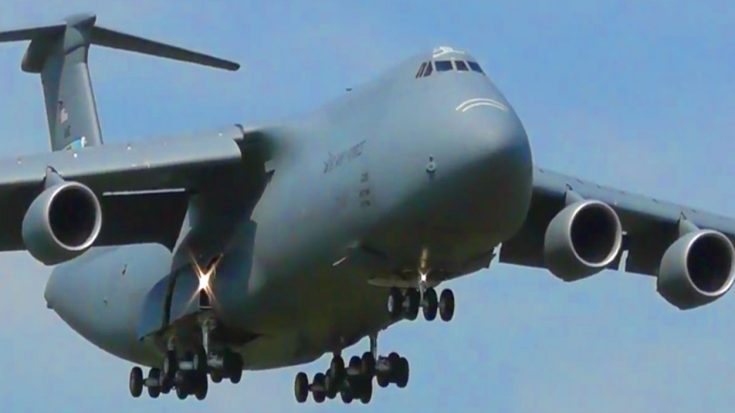 There is no mistaking the Lockheed C-5 Galaxy, it’s just so damn big. In fact, the C-5 is the biggest plane in the entire United States Air Force. These planes go all over the world hauling the biggest cargo and never cease to amazing the masses with their size.

Since its introduction in 1970, there have been few planes that could even come near the size and hauling power of the C-5 Galaxy. With a wingspan of 222 feet, the Galaxy is bigger than big and really has some room to move. The nose tips upward so you can fit just about anything inside the Galaxy’s massive cargo hold. The C-5 can fit attack helicopters, tanks, Humvees, other planes, they can even go as big as an entire nuclear submarine.

If you hang around Air Force Bases every once in a while you will see on touchdown and it is quite a sight to see. This video shows a massive C-5 coming in for a landing at RAF Mildenhall, so sit back and wait for the big drop.

Watching this video alone will make you realize just how huge it is – a real monster in the sky. Imagine if you actually see this passing by – it’s easy to get overwhelmed by its massive size. Besides, it’s definitely hard to miss!

“We started to build the C-5 and wanted to build the biggest thing we could… Quite frankly, the C-5 program was a great contribution to commercial aviation. We’ll never get credit for it, but we incentivized that industry by developing [the TF39] engine.” – General Duane H. Cassidy

It’s a stunning and great catch – a definite treat for anyone who’s a fan of this big bird. Its development may have been complicated with several problems along the way, but it’s all worth it in the end.