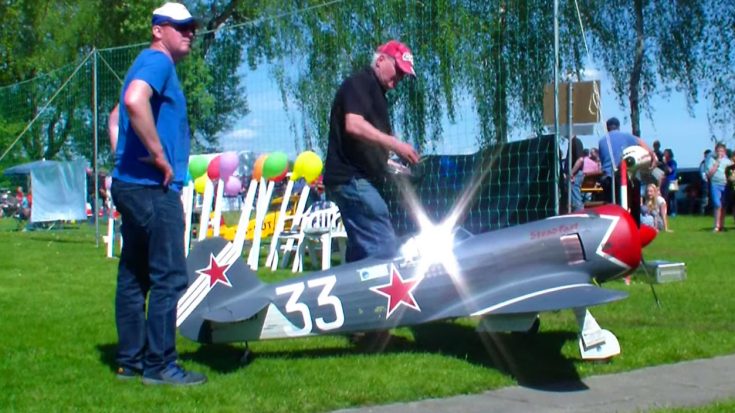 The Yakovlev Yak-11 was among the most prominent trainer planes used new Soviet pilots. Trainer planes weren’t a priority during WWII but as the Cold War escalated the need for new pilots followed. Nicknamed “Moose” by NATO officials this plane became the introductory aircraft for many pilots in the Soviet Union.

“Sometimes equated with the North American T-6 trainer in terms of its widespread use, 3,859 basic Yak-11s were produced through 1956. Although production then ceased in Russia, it continued in Czechoslovakia, where it had been licensed to LET in 1953 with the designation C.11. Many of the Yak-11’s still operational in the USSR were replaced in 1958 by the Yak-11U, a tricycle-geared variation of the aircraft intended for training jet fighter pilots.”

Roughly 120 Yak-11s survive in flyable condition and have become a fan favorite in air races. Now this racing fan favorite has become an oversized RC plane and it is very impressive. That 400ccm engine packs a punch and you can hear it from buzzing from a mile away. Check out this fast and agile Yak-11 as it slices through the air in this video from RCHeliJet.