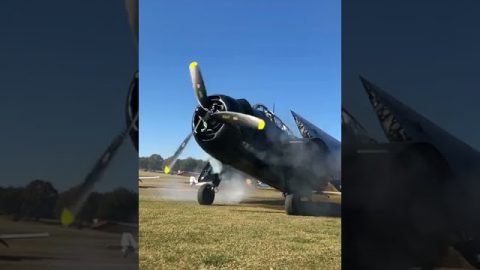 The Vought F4U Corsair is nothing but legendary. It is considered one of the greatest fighter aircraft in WWII. Furthermore, it’s also well-known for its firepower, ruggedness, and speed. The F4U did well as a fighter and attack aircraft supporting ground forces.

This particular Corsair in the video had a unique sound as it is powered by the mighty Pratt & Whitney R-1830 Twin Wasp- an American air-cooled radial aircraft engine. Its bore and stroke are both 5.5 in (140 mm.) and displace 1,830 cu in (30.0 L)

The production of this engine started in 1932 and was widely used in the 1930s. The R-1830 isn’t manufactured anymore and is mostly retired today. However, it is still used on the Douglas DC-3 and other museum aircraft planes in airshows like this Corsair.