Crosswind Before This B-29 Touched Down 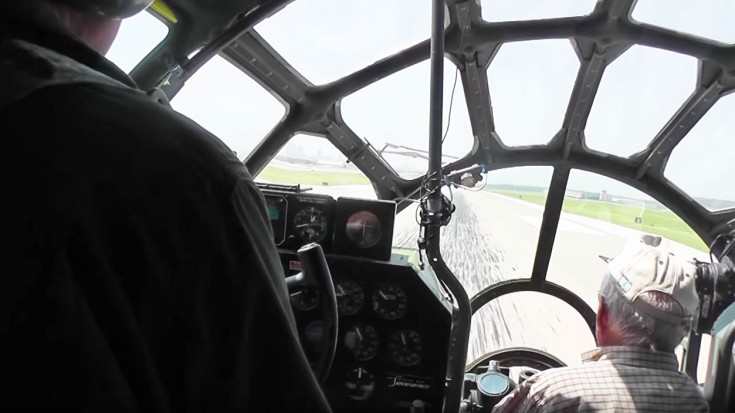 Just Love That Star Wars Like View From The Front.

This is a really unique perspective not only because it’s filmed from the cockpit of a B-29 Superfortress, but also because it captures the touchdown as well. You can see all the pilot’s movements as they land this huge aircraft and even hear the tires screech as they touchdown. It’s pretty awesome to say the least.

As you all might know, this girl’s name is Fifi. She’s the only airworthy B-29 in the world, however, B-29 Doc is heading our way too. Doc just had her engines successfully tested and is awaiting more funds to be certified. How great would that be?

Fifi is the only airworthy B-29 Superfortress as of this writing, but Doc is about to get certified to join her in flight!

As for Fifi, she’s got quite the history herself. She was built in Washington state in 1945 with the serial number 44-62070. Not sent off to fight, she was delivered to the United States Air Force and was used as a trainer, modified to a TB-29A. She was then left in the desert before being reactivated to active duty for five years and then retired.

Withering away in China Lake, California, the Commemorative Air Force found her in 1971. Filling out countless government forms to let her fly to their hangar for full restoration, the CAF got parts from surrounding, more degraded B-29s, and in just 9 short weeks got her to takeoff. For the next three years and millions invested, she has been restored to the glorious bird you see at air shows.