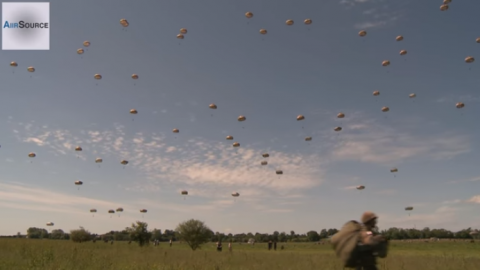 The 75th anniversary of the biggest seaborne invasion in history is getting closer, and many Allied nations have already planned commemorative ceremonies to relive and revisit this most remarkable event.

Some of those events include parades, firework displays, concerts, and even military camp re-enactments. But all these might pale in comparison to the reenactment of the massive paratrooper jumpoffs into the hallowed invasion beaches of Normandy.

The planes will fly across the Atlantic and the English Channel before wrapping up in Northern France. The more astonishing fact, however, is that the five C-47 Transport Aircraft used during Operation Overlord will headline this impressive homage – a fitting tribute to the millions of heroes who risked their lives to stop one man’s megalomaniac ambitions.

On June 6, 1944,  the Allies launched a massive offensive to invade German-occupied Western Europe and deployed 24,000 paratroopers, who jumped into the warzone to join over 160,000 of their comrades on the ground. The operation’s objective was to “secure a lodgement of the continent, from which further offensive operations can be developed.” And secure they did, in a grand display of military brilliance which remains unmatched until this day.

Let us thank the Round Canopy Parachuting Team – a handful of Dutch parachuting and history enthusiasts – for coming up with this idea.  They celebrated D-Day’s 70th anniversary with the first commemorative jump near the village of Sainte-Mere-Eglise in 2014, and this event attracted a huge audience that clamored another go-round in about five years. For those of you who missed it the first time: it’s finally here.

Twenty planes are expected from the US, while another 15 will fly from Europe. A total of 250 paratroopers will make the jump next month.