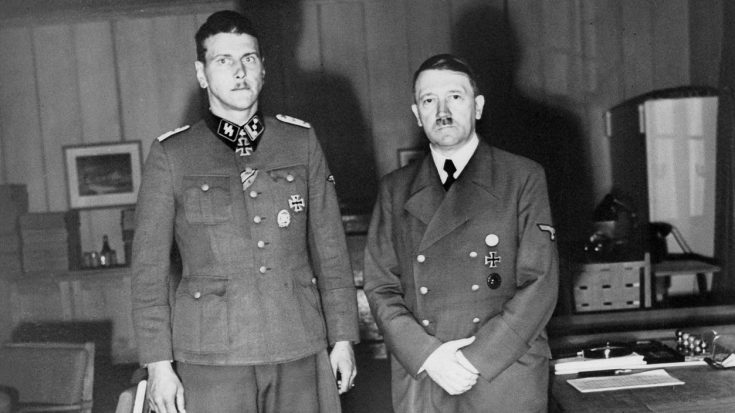 Members of the Nazi SS party were considered to be the best of the best when it came to soldiers. These ruthless killers made examples through force and violence to keep the rule of the Reich over Germany. But only one man was so ferocious that he was given the title of “The most dangerous man in Europe”, Otto Skorzeny.

Otto Skorzeny was the SS officer who stood out from the rest of the crowd. He was strong, intimidating man who stood 6 feet, four inches tall and a face scarred from a sword fighting incident in his youth that taught him to never fear death.

“The knowledge of pain I learned in fencing taught me not to be afraid in combat.”

With the outbreak of WWII Skorzeny volunteered to become a pilot for the Luftwaffe but his height made him too tall to fit into most fighter planes. Instead, he joined the SS as an officer cadet fighting on the eastern front, rising through the ranks quickly. He took shrapnel blasts to the head, fought on until he had to be hospitalized. While in recovery Skorzeny studied guerrilla warfare and other unconventional military tactics which soon gave him a leadership position in the SS.

Skorzeny has many accomplishments during his time in WWII including leading a panzer group, rescuing Mussolini from imprisonment and threatening General Eisenhower with an assassination plot that put him into hiding.

Following the fall of Germany at the end of WWII, Skorzeny was imprisoned for two years before his eventual escape. He later revealed that his liberation was orchestrated by the United States Government in order to hire him as an assassin for the Isreali Special Operations group Mossad.

Skorzeny went from being Hitler’s favorite commando, rescuing Mussolini, attempting to kill future Presidents and going off to become an infamous assassin before dying of lung cancer at age 67. The things mentioned here are but a brief glimpse into his life, check out this segment from Feature History for a deeper look at Otto Skorzeny’s life.