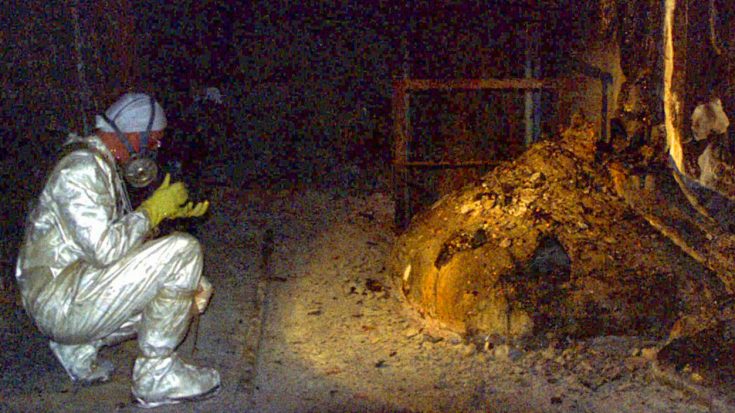 Over the course of history, there have been many weapons of war that have inspired dread into the hearts of millions. Nuclear weapons often come to mind when people think of the most intense dangerous things on earth. But there is one single object on earth that does have more destructive potential than anything else and it still exists to this day.

The year is 1986 and the world is fixated on a small town in Ukraine with a power plant that goes by the name of Chernobyl. The town’s nuclear power plant went into meltdown causing the worst nuclear disaster in history. After the radioactive dust had settled the Soviet Union sent investigators to oversee the damage of the now abandoned nuclear facility. The destruction was incredible but one sole object amongst the wreckage proved to be more deadly than anything else.

A mass of molten nuclear waste that emits more radiation than anything else on the planet despite laying latent for years. The wrinkled surface of the mass earned its nickname The Elephant’s Foot. The nuclear fuel was so hot that it melted concrete, sand and sealing materials absorbing it into the mold you see today. Even pictures of the Elephant’s Foot came out blurry and distorted due to the damage caused by radiation.

“After just 30 seconds of exposure, dizziness and fatigue will find you a week later. Two minutes of exposure and the body cells will soon begin to hemorrhage; four minutes: vomiting, diarrhea, and fever. At 300 seconds you have two days to live.”

The worst part is that this mass could actually melt through the floor and begin leaking radiation out of the protective shielding surrounding Chernobyl. Over 30 years after the meltdown The Elephants Foot is still deadly and expected to remain radioactive for the next 100,000 years. To this day it remains the most deadly object on earth and its full story can be viewed in this clip.