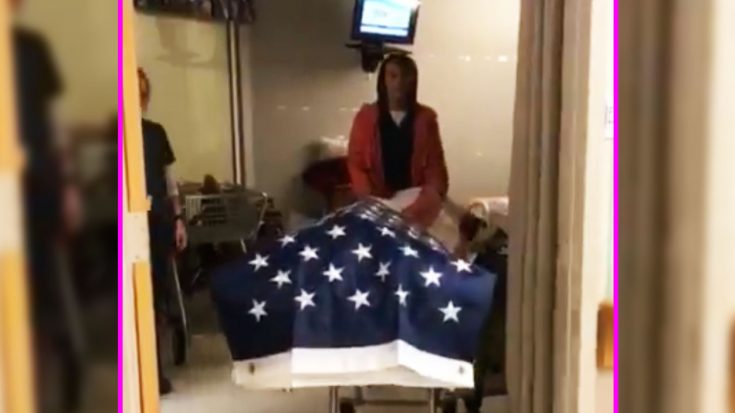 Aleck J. Primos, a World War II veteran, was laid to rest on October 16th, 2018 in a Veteran’s Home in Oxford, Massachusetts. He was born on February, 8th, 1923 in New Orleans, Louisianna where he also attended a university. World War II erupted during his junior year at Tulane and he was quickly commissioned as a Naval Officer.He got married to the love of his life right before his deployment and was sent off to China. Once there, he trained guerrilla fighters behind enemy lines according to his daughter Claudia.

Aleck managed to survive that turbulent time in our history and was discharged from the Navy in 1946. He reunited with his wife and family and had three children, including Claudia who shared her story with all of us.

The Outpouring Of Support

Aleck passed in his hospital bed with his daughter Claudia by his side. After the staff draped an American flag over his body in honor of him serving in World War II, she decided to make a video of his departure through the hospital hallways as some of his family couldn’t be present.

That video which was meant to be shared with family and friends received 250,000 likes, 330,000 shares and was viewed by almost 20 million people within a week. The reason this video must have resonated with people online was that once they turned the corner, all the other vets lined the wall and saluted Aleck while Taps was playing in the background.

People from around the world responded with a whopping 77, 000 comments of support. Some of the most memorable ones include:

Claudia issued the following message on her Facebook page after her profile was filled with support from around the world:

The entire scene was as beautiful as it was full of sorrow. It’s good to know, however, that so many people could appreciate the actions of one man who sacrificed so much over 70 years ago.

Rest in peace and thank you for your service.