Demonstration of How Powerful Panzerfaust Anti-Tank Weapon Is 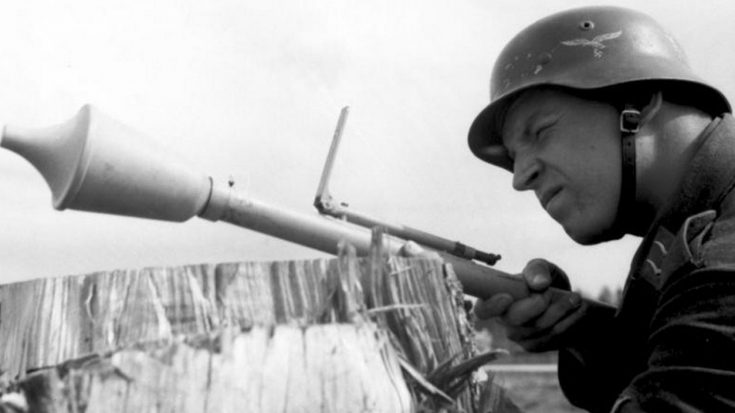 While tanks and aircraft have a strong presence the during WWII, infantry units will always make up the backbone of a war effort. But when foot soldiers are faced with a tank, the odds aren’t exactly in their favor. To even the playing field, German soldiers were given a weapon that could destroy tanks, the Panzerfaust.

Panzerfaust which literally translates to “tank fist” was a very effective way of allowing German soldiers to combat invading Allied tanks. They were introduced to the front lines in September of 1943 with the Panzerfaust 30 which had a range of 30 meters followed by the more common Panzerfaust 60 with its range of 60 meters.

The Panzerfaust was a short range recoilless gun equipped with a warhead. Weighing a little under 15 lbs it was light enough to be used by footsoldiers and perfect for sneak attacks on tanks. The warhead pushes concentrated shrapnel forward to penetrate thick armor which follows with an explosive blast to damage heavy vehicles.

“It was percussion ignited, meaning it was similar to a bullet which used a firing pin to strike a flint which would cause a spark and ignite the gun powder. The resulting gases would then push the Panzerfaust projectile outward, thrusting it forward with kinetic energy. The backblast of the weapon was very hazardous and could seriously injure a bystander standing behind up to three meters away.”

American soldiers were known to pick up discarded Panzerfausts because they were more effective and either to operate than bazookas. The lack of recoil gave it an ease of use and even German civilians were given instructions on how to use them in the event of an attack. Check out this archival footage of soldiers demonstrating the ability to destroy a tank with a handheld weapon.