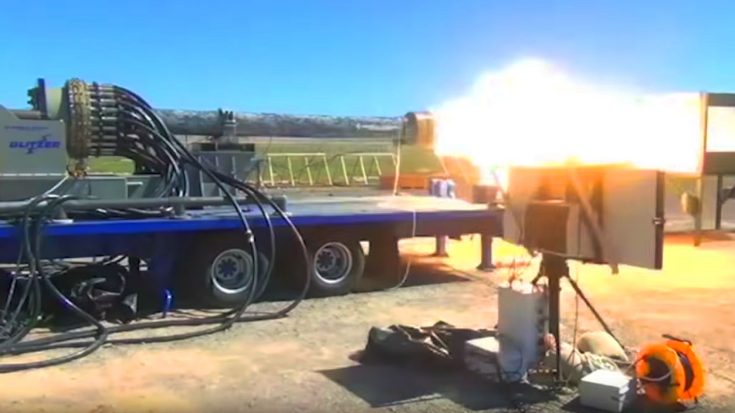 As threats to our safety become more dangerous, so must the need to combat them. The General Atomics Electromagnetic Systems Group (GA-EMS) has been hard at work developing the latest and greatest combat weaponry. The gun of the future stands to be their high-powered Blitzer Electromagnetic Railgun.

The electromagnetic gun is capable of launching projectiles at speeds of Mach 5 with an expected range of several miles. The railgun systems are planned for multiple roles aboard ships, as land-based fixtures and mobile tactical weapons aboard vehicles.

“GA-EMS railgun systems feature electromagnetic launchers that use electricity instead of chemical propellants to fire projectiles at high speeds. The high muzzle velocity can be twice that of conventional guns leading to short engagement times, extended keep-out, and longer range.”

The systems of the Blitzer Electromagnetic Railgun will be able to engage multiple targets at once thanks to its rapid firing rate. General Atomics has made amazing progress with the testing of this incredible weapon using it against several targets. Seeing is believing so check out the electromagnetic railgun going to work in this clip.