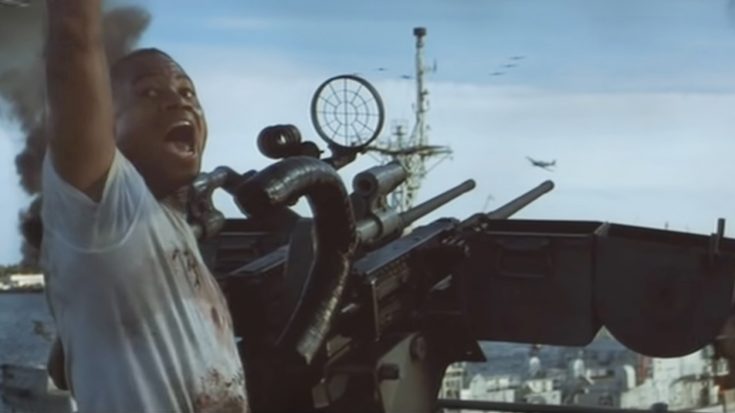 Yes, we’re talking about that one scene from “Pearl Harbor.” And while “Pearl Harbor” earns no awards for accuracy in depicting Pearl Harbor and the Battle of Britain and the Doolittle Raid, we do like that Cuba Gooding Jr. got a glorious moment depicting the actions of real-life Doris “Dorie” Miller.

Dorie Miller volunteered for the Navy in 1939. A 6 foot 3 inch tall heavyweight boxing champion, the Waco, Texas native was assigned to the USS West Virginia as a cook.

When the Pearl Harbor attacks happened in Honolulu, Hawaii, Miller was ordered to load the #1 and #2 Browning .50 caliber anti-aircraft machine guns. He didn’t just do that though.

Despite never being trained on the guns, Miller took the attacking Japanese Zeros to task. He shot at them with one of the guns until it had nothing left to give and he was ordered to abandon ship.

“It wasn’t hard. I just pulled the trigger and she worked fine. I had watched the others with these guns. I guess I fired her for about fifteen minutes. I think I got one of those Jap planes. They were diving pretty close to us.” – Dorie Miller

Although he thought he might have gotten one of the planes (in the film he downs 4), there aren’t any records to confirm that anyone on board shot down a Japanese plane that day. Still, Miller’s brave actions were recognized by Admiral Nimitz himself. He received both the Navy Cross and the Purple Heart.

Miller wouldn’t survive the war. Sadly, he was marked missing and presumed dead after the aircraft carrier USS Liscome Bay was sunk by a Japanese submarine in November 1943.

Of course, 2001’s Pearl Harbor didn’t quite get it right. The film version has him using twin air-cooled M2s instead of the single water cooled mount, there’s some goofs on the shots themselves,  and he didn’t down 4 planes.

But it might still be the best part of “Pearl Harbor.”