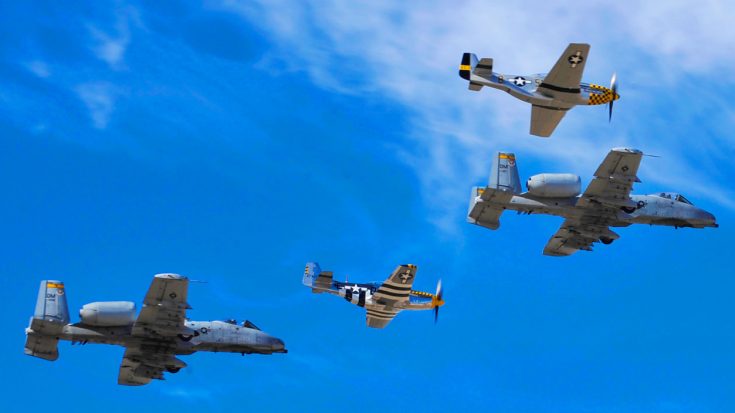 Best Of Both Worlds.

It’s that time again, and it comes around only once a year the 2017 Heritage Flight at Davis-Monthan Air Force Base. For 20 years the Heritage Flight Training has brought in civilian pilots to fly military aircraft old and new. There were a wide variety of fighter planes present at the demonstration but nothing comes close to the double A-10 Warthog and double P-51 Mustang Heritage Flight.

These guys are loud, proud and they look so damn good flying together at this airshow. You have the most infamous ground support aircraft of all time paired with one of the most legendary warbirds flying in unison.

“The civilian pilots who are flying our historic military aircraft, flying in the same formation as some of our most current fighter jets, really visually connects the past the present and the future of the Air Force.”

Doubling up on these planes is a just such a sight to behold for the aircraft lover in all of us. So wait no longer and feast your eyes on the double pairing of some of the greatest warplanes that ever took to the skies. Special thanks to Airboyd for the amazing clip.