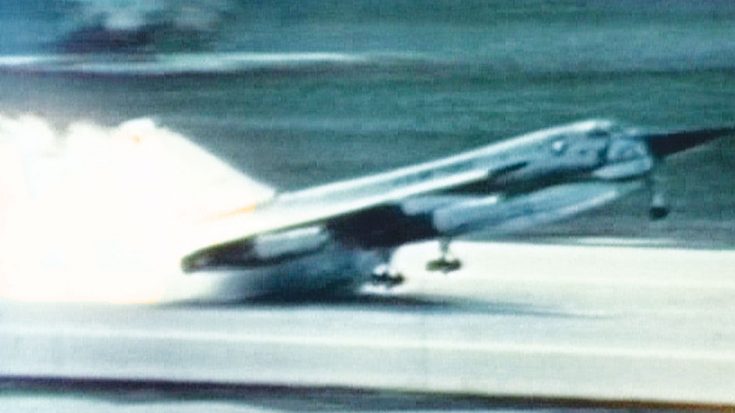 Sure That Was A Bit Stressful.

Let’s step back in time to around 1960 when the B-58 Hustler was being evaluated and getting ready for service. A supersonic strategic bomber, this delta wing “fighter style” jet was a first of its kind. Implementing all sorts of new technologies becoming available at the time, it was an exciting time for aviation.

Although it set 19 world records including top speed and coast to coast flights, the Hustler was only in service for 10 years from 1960 to 1970.

This video however, shows some of the growing pains it had to go through. According to the description, this video is comprised of two clips from separate incidents. In both cases however, the tires of the Hustler blew on takeoff and the crew was forced to land on metal alone. That’s pretty scary as the aircraft’s empty weight still amounted to almost 56,000 lbs.

As you’ll see in the video, the landings were actually quite smooth. Yes, there was a lot of sparking and flaming, but the bombers came in to a full stop and were evaluated. As a precaution however, you’ll see in one clip that the crew was jettisoning fuel on approach. Also, their hatches were open just in case something caught fire and they needed to escape as fast as they could. Really good thinking on their part if you ask us.