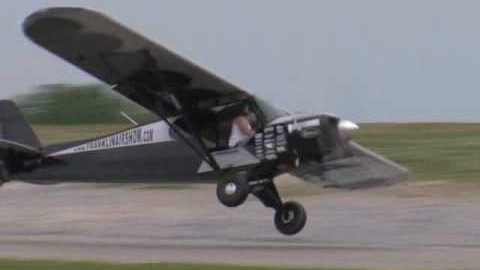 This Delta Airlines Pilot Has Some Skills

During an airshow some years back, the crowd was treated to one of the most unique shows around the world. As a plane is prepped for flight, a man who appears to be extremely drunk cuts through the ropes and guns it for the aircraft. With security chasing him, he manages to hop into the plane and takeoff before they could catch up with him. After that, it’s pure flight magic. This is all of course a part of the show orchestrated by an expert pilot by the name of Kyle Franklin.

This act uses a highly modified PA-18A Super Cub which was built in 1956 yet designed right after World War II in the late 1940s.

Once in the air, Kyle performs some of the most dangerous yet spectacular looking stunts which resemble what you’d expect a drunk pilot to fly like. Tipping from one wheel to the other on the tarmac, every ‘drunk’ maneuver just showcases the incredible skill of this pilot. Comedic in nature, once the Kyle lands the place he literally falls out of it while it’s still spinning in circles, avoids the prop and finishes the act with a well deserved bow. Splendid!