Dynamic A-37 Dragonfly Blasts Into The Sky 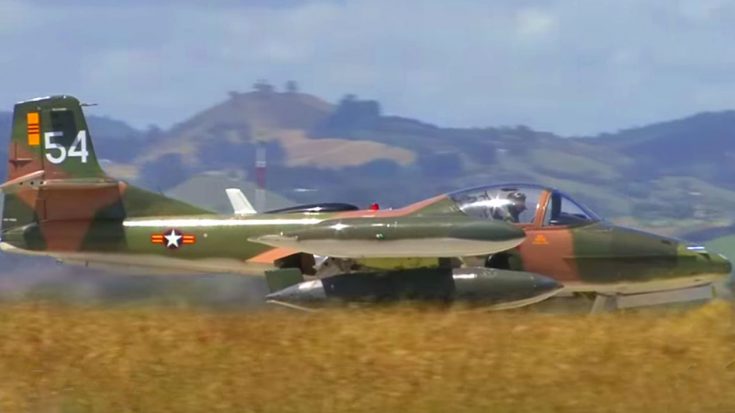 The Vietnam War brought about a variety of aircraft for a variety of roles but the majority of enemies were surface targets. At this time when ground attack aircraft started gaining a stronger presence, making its debut was the Cessna A-37 Dragonfly.

During the Vietnam War aircraft such as the F-4 Phantom, the F-100 Super Sabre and F-105 Thunderchief gained all the glory but the A-37 Dragonfly still played a vital role. The Dragonfly’s straight wing configuration allowed it to fly 100-mph-slower than other aircraft to increase loitering time and accuracy against ground targets.

The Cessna company by trade makes pleasure aircraft and the A-37 remains the only combat jet they have made. Developed from a T-37 Tweet Trainer which was converted into a combat jet capable of carrying rockets, gun pods, bombs and a sidewinder missile. The A-37 was relatively inexpensive, about six of them could be purchased for the same price as an F-4 Phantom.

“In its first 3,000 sorties, not one A-37A was downed by enemy fire. Combat Dragon continued until December 1967. After five months and 19,000 ordnance deliveries, the airplane and Weber’s operational strategy were vindicated. From studying the 5,000 combination flight tests–combat missions flown during the operation, Cessna developed the bulked-up A-37B, with more thrust from newer-generation J85 engines plus in-flight refueling capability.”

The Dragonfly was used by the United States Air Force only for the duration of the Vietnam War. However, the A-37 is still operational for combat roles in the air forces of several South American and Central American nations. It is still a very capable jet and the Historical Aviation Film Unit has restored one to flying condition as you can see in this video.