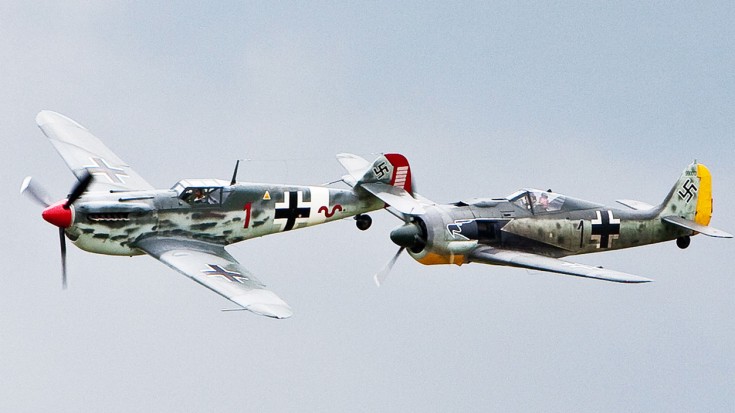 This Is Quite A Different Sight Than 70 Years Ago!

This 2009 footage from an airshow in Germany reenacts what would be quite a common sight over European skies during World War II. B-17 Flying Fortresses have flown countless missions over enemy territory 70 years ago, usually being intercepted by Bf 109s or Fw 190s. Luftwaffe pilots who have flown both fighters generally preferred the Fock Wulf 190s over the Messerschmitts, the latter performing better only in high altitude situations. When it came to ruggedness however, both the Fw 190s and B-17 had a solid reputation.

Completely different planes in both manufacturing and purpose, both the B-17 Flying Fortress and Focke Wulf 190 were widely known for their ability to take a beating in combat and keep on flying.

The most notable accomplishments of both planes, which were many, are as follows. The B-17 Flying Fortresses are widely known for being the U.S.’s most famous bomber, dropping more bombs during World War II than all other bombers combined. The Focke Wulf 190 on the other hand, was considered the backbone of the Luftwaffe for most of World War II. Flown by many German aces with most having kills in the hundreds, they were not a welcome sight to B-17 formations.