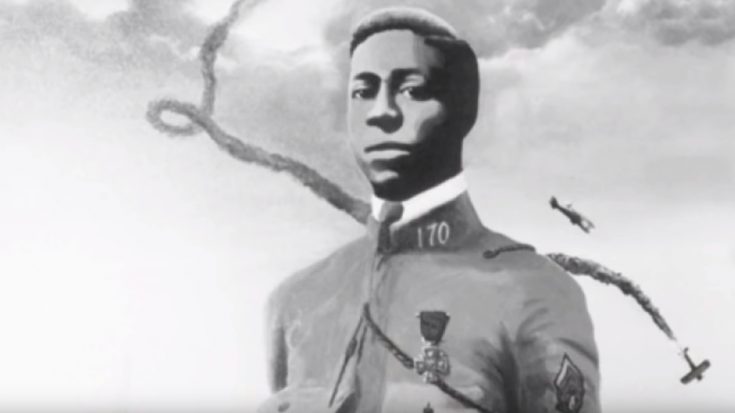 The History Guy: History Deserves To Be Remembered / YouTube

Eugene Jacques Bullard lived an extraordinary life. Born in 1895, he left America as a teen after witnessing his father’s near-lynching in Columbus, Georgia. He served the French through the Foreign Legion in both World Wars, becoming somewhat of a legend there. Eugene Jacques Bullard, the first known African-American pilot, deserves to have his name known. Here are 6 must-know facts to get you started:

6. He had a unique resume

In addition to his decorated military career, Bullard became a boxer and performed slapstick in an African-American troupe known as the Freedman Pickaninnies. He was a drummer. He owned a nightclub and through that, socialized with the likes of Josephine Baker , Louis Armstrong, and Langston Hughes. After WWII, he operated an elevator at the Rockefeller Center in New York. Oh yeah, and did we mention that he was also the first known black aviator in history!

5. He was nicknamed while serving with the French Foreign Legion

“The Black Swallow of Death” was the  nickname given to Bullard from his involvement with the 170th French Light Infantry Regiment. The regiment’s emblem was a swallow, serving as the inspiration. Bullard would be gravely injured in the fighting at Verdun in 1916. He used the setback as an opportunity to  join the French Air Corps.

4. He Was The First African-American Pilot – But Not For The United States

Bullard learned to fly Nieuport and Spad biplanes. He flew his first mission on September 8, 1917 with the Lafayette Escadrille and would go on to fly twenty combat missions in WWI. Although unverified, he has two kills to his name. Completing the physical exam to be recruited by the United States Army Air Service, Bullard attempted to serve his country of birth. Unfortunately, they only took white pilots.

3. He Was A Veteran Of Two World Wars

You might think that after one world war and many fights fought, Bullard would take a break. But he was never one to back down from a fight. He volunteered once again, serving with the 51st Infantry Regiment. Wounded defending Orleans in 1940, he barely escaped and made his way, finally, back to the United States.

2. Although Famous In France, He Was Unknown In America

Bullard was highly esteemed in France. He had received fifteen decorations for his service, been invited to rekindle the flame at The Tomb of the Unknown Soldier, and was even made a knight in 1959. But he chose to spend his last years in the United States, the country he still loved. It wasn’t until 1959 that he was recognized there, mainly due to an interview on NBC’s Today Show. The interview took place in the same building that he worked in as an elevator operator.

1. He Was Finally Recognized in America 33 Years After His Death

Bullard passed away from cancer on October 12, 1961. He was posthumously inducted into the Georgia Aviation Hall of Fame in 1959. And finally, on August 23, 1994, he was posthumously  commissioned as a second lieutenant in the United States Air Force. This promotion came exactly 77 years to the day after he had first attempted to serve his beloved country of birth. About time!

Check out this great informational video of his life below.