Even In Sub-Zero Temps, The Guards At The Tomb Of The Unknowns Aren’t Fazed 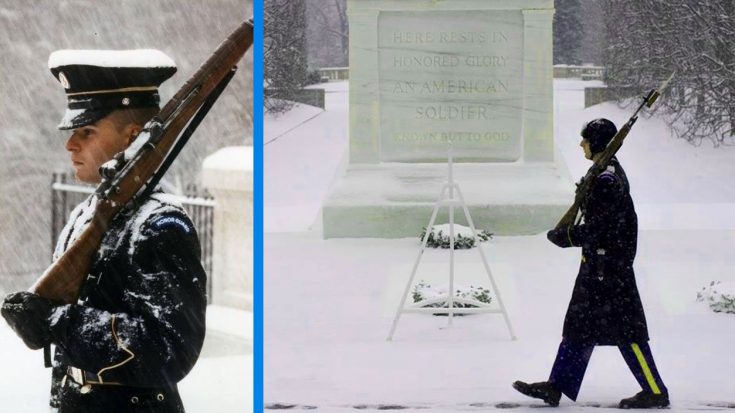 The ongoing polar freeze has crippled many states. Sub-zero temperatures and added windchill have brought temperatures down to the -70s in places like North Dakota. Many flights have been grounded and people stocked up on supplies to brave the weather, some communities getting cut off from electricity and other services for days. Even some postal workers were told to stay home which is extremely uncommon.

Despite the historic weather, there are a few men and women in our armed forces who never cease to perform their duties no matter what nature puts in front of them. We’re talking of course about the guards at the Tomb of the Unknowns.

To honor all those missing soldiers, guards walk and protect the grounds every day of the year around the clock, including the past 48 hours which were freezing. There has yet to be a day when it’s too cold, too windy or too hot for them to perform their duty. Even during Hurricane Katrina the guards braved the winds and remained on post.

People have not left their houses in the past few days as it’s not exactly a tourist type walkaround day, but the video below was taken in January of last year. The temperatures were also below zero, albeit not as cold as the last few days, but as you’ll see, there’s nothing that can stop these dedicated men and women from performing their rather sacred duty.