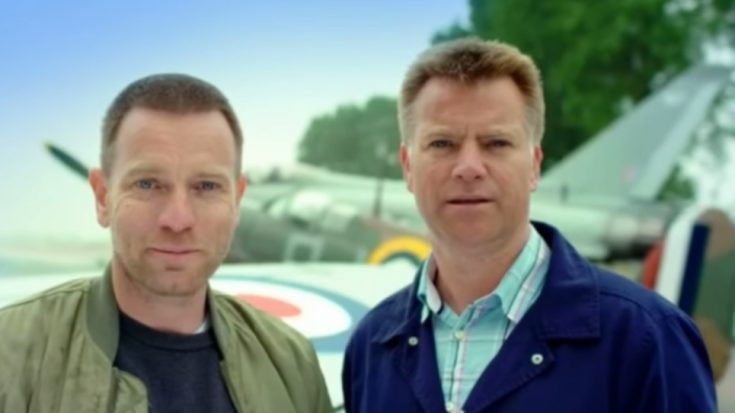 We all know actor Ewan McGregor, if only for his role as Obi Wan Kenobi in Star Wars. But do you know that there’s an Obi Two? Meet Colin McGregor, Ewan’s older brother who just so happens to have had an amazing 20 year career flying Tornado GR4s for the RAF. (Obi Two, by the way, is his call sign.)

When these two brothers get together, you know it’s going to be good. Just last year when the RAF turned 100 years old, the brothers delved into the entire history of the RAF for the BBC documentary “RAF At 100.”

And by delved into history, we mean that they spoke with Spitfire pilot Geoffrey Wellum who flew in the Battle of Britain at just 18, met with pioneer female pilots Mary Ellis and Joy Lofthouse, and, wait for it – they got to fly the planes that came to define the RAF. Their flights included spins in the Spitfire, Chinook helicopter, and modern supersonic jets.

“Through Adversity To The Stars”

WWII brought huge expansions with the notable addition of many foreign forces like the Royal Air Canadian Air Force, the Royal Australian Air Force, as well as Polish and Czechoslovakian forces. The most significant air campaign victory in the history of the RAF, the Battle of Britain, saved the United Kingdom from being taken over by the Germans. It also catapulted the Spitfire to national icon status.

It’s difficult to pack 100 years of rich history into just 90 minutes, but this quick look with Ewan and Colin is definitely a treat.

See the exciting trailer below and let us know if you’ve watched this piece!