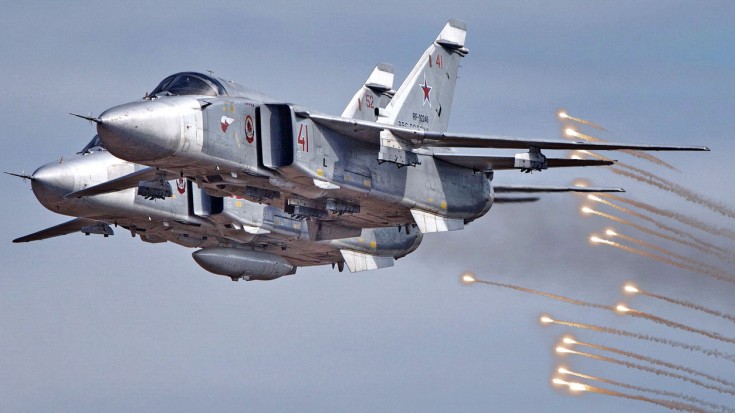 This short clip looks and sounds fantastic, but we know what all of you are probably thinking. Although this is fun to watch, it’s insanely dangerous as flares burn hotter than the jet’s afterburners. And we agree with that, however, although we don’t condone such behavior, you have to admit it’s a pretty cool thing to witness. Take a look for yourself.

The jets flying by are Russian made Sukhoi Su-24s, often referred to as Fencer by NATO and other foreign bodies.

The Su-24s in the video are all weather attack aircraft that were developed in the late 60s and are still in service. These particular aircraft flying just feet from the ground are the MR variants, which differ from previous versions as they received cockpit and navigational upgrades. As for the flares they’re recklessly yet spectacularly dispersing about, they are probably regular aerial infrared countermeasure decoys. Made of magnesium or another metal capable of burning extremely hot, they are meant to confuse heat-seeking missiles into following them as opposed to tracking the jet’s engines. What they are NOT supposed to do is accidentally scorch people on the ground. Luckily, they didn’t.