F-16 Coming In Too Close For Comfort 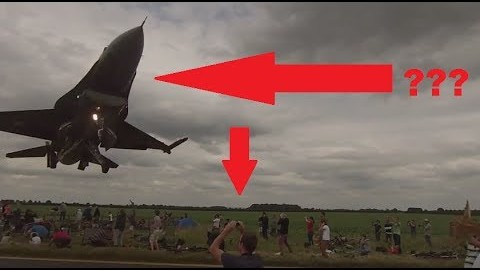 Would You Have Ducked. I’d Duck!

Most people love a thrill, but the people in this video were definitely in for a surprise. Camping out near an air force base, they waited for a plane to come in for a landing to see what it’d be like. What they got is an F-16 Fighting Falcon and as you might have guessed, they got pretty scared. Standing until the last second, almost everyone in the video hit the ground when the pilot came in over the tops of their heads. It’s worth a watch to say the least.

Although called the Fighting Falcon, pilots often called it the Viper, as it resembles a snake.

For a quick history lesson on the F-16, it was designed and manufactured by General Dynamics in 1976. Their first flight took place in 1978 and proving themselves quite capable multi-role fighters, over 4,540 of them were built till this day. Although they are not bought by the United States anymore, they are still produced today for other nations, although the manufacturing was given to Lockheed Martin on 1995.