F-16 Fighting Falcon VS. Lambo Aventador | Who Takes It? 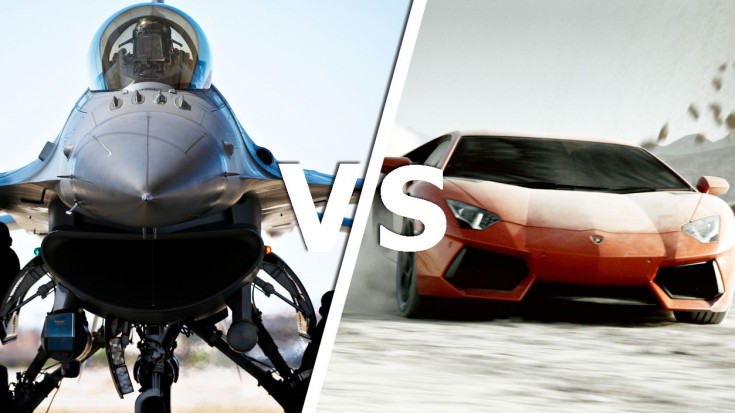 This Of Course Is About Acceleration.

This is a pretty cool little experiment which was brought to us most likely by Lamborghini. We don’t know that for sure, but we’re assuming Lockheed Martin is not trying to sell Fighting Falcons to citizens. Rather, it might seem like the car manufacturer was the one who set this up to show off its new high class supercar, namely, the Aventador.

As you can imagine, this isn’t a top speed race. That’d be silly. Although the Aventador is quite the supercar with a max speed of 230 mph, the F-15 flies more than 1,000 mph over that, topping out at 1,320 mph at altitude and with a clean configuration.

The main thing to consider here is power to weight ratio.

What this competition is testing is acceleration and a really surprising thing happens if you think about it. One one hand you have a jet. A plane powered by a jet engine (just trying to stress that). The F-16 however does weigh about 19,000 lbs. empty though, so that’s a lot of metal to push.

The Lamborghini is extremely light in comparison at 3,472 lbs., but has a 720 horsepower 6.5 liter, V12 engine. That’s a lot of power to propel a vehicle.

In the end though, this friendly competition is still a blast to watch.