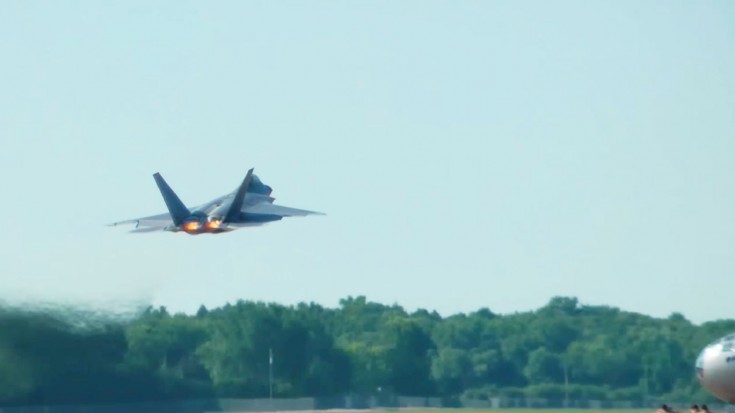 This awesome footage was captured at the end of the 2015 Airventure Airshow in Oshkosh, WI. One of the biggest and most respected airshows in the United States, these organizers know how to put on a fantastic show. They attract over a half a million people from 60 countries and the obvious reason for that is the arrival of over 10,000 aircraft for the event.

F-22 Raptors were introduced in 2005 as fifth-generation all-weather stealth tactical fighters, but have since been adapted to ground attack as well.

Although this particular show displays F-22 Raptor jets, which we find impressive by the way, this show has plenty of World War II era planes that practically steal the show. From Mustangs to Flyingfortresses, this is truly the best show to see if you love aviation.

At the very end of the show of this year, the United States Air Force departed with their F-22s and the guys at AirshowStuffVideos managed to get it on camera. Although very neat to watch these jets take-off, it’s even cooler to see them passing right by a World War II bomber that is just sitting there next to the runway. It’s not the end of the world cool, but seeing modern jets fly right next to the one and only (for now) B-29 is sort of historic in our opinion. Hope you enjoy the clip as much as we did.