F-35 Has A New Radar Problem, But The Fix Is Beyond Ridiculous 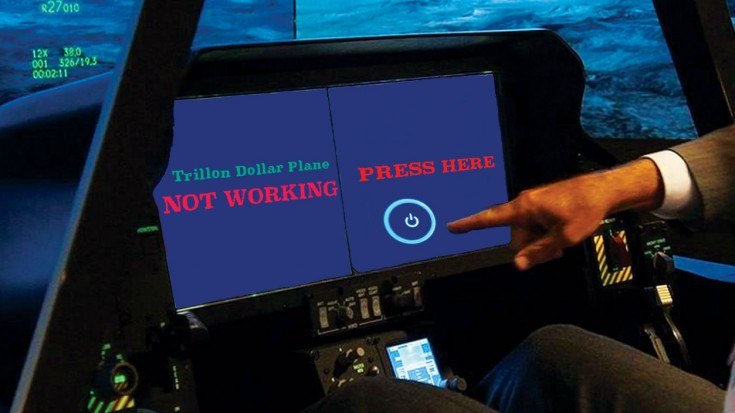 Everyone and their mother is knocking the F-35 program. It has become somewhat of a past time for taxpayers simply because it’s so easy to do. With over a trillion dollars invested in a plane that is simply not working right, it’s hard to stop thinking about it.

It doesn’t really matter what your opinion of the plane is when it comes to this recent flaw however. It’s simply pretty funny if you think about it, because anyone of us can “fix” what’s wrong with it.

“What would happen is they’d get a signal that says either a radar degrade or a radar fail—something that would force us to restart the radar.”-US Air Force major general Jeffrey Harigian

For those of you who don’t know what a radar is (we’re partly joking), it’s very important. F-35s are equipped with an AN/APG-81 AESA radar which stands for active electronically scanned array. It’s basically the “eyes” of the aircraft telling the pilot what threats lay ahead and on the ground as well as feeding him/her other pertinent information. It’s really important is what we’re saying.

As it turns out, sometimes this radar degrades or stops working completely in flight. That’s a pretty big deal as we mentioned above, however, there’s a quick fix for it now.

Pilots have to simply turn the radar on and off and reboot it. You know, just like when your computer freezes. The main difference is that most people don’t need to worry about tanks firing missiles at them while their computer is restarting.

Here’s a little informational video about what that radar is SUPPOSED to do. It’s actually really amazing technology…when it works.