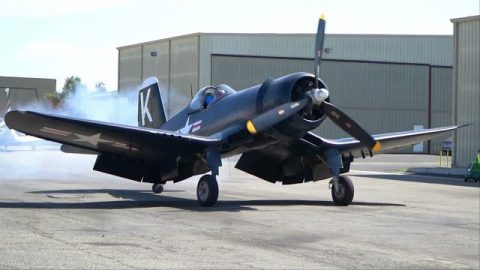 Engine Start of the F4U-1A Corsair

An F4U-1A Corsair was seen starting its engines at the Plane of Fame Air Museum in Chino Airport, Southern California. During the demonstration, the radial engine sounds amazing. The model arrived in San Diego in 1943 before being assigned to a Navy fighter squadron in the same year.

The F4U-1A variant first entered service during the summer of 1943 and was used by famous US Navy and Marine Corps aces. The plane was an excellent fighter that served during the frontlines from WWII to the Korean War. It saw a large amount of action with the Japanese Navy and continued to serve throughout the Korean War with further variants.

The bomber capability pioneered by this variant is one of the most practical additions to the inherent power of the aircraft. It had characteristic features such as a longer tailwheel, a taller seat, and an enhanced canopy.