Corsair And F-18 Superhornet Spend Some Quality Time Together 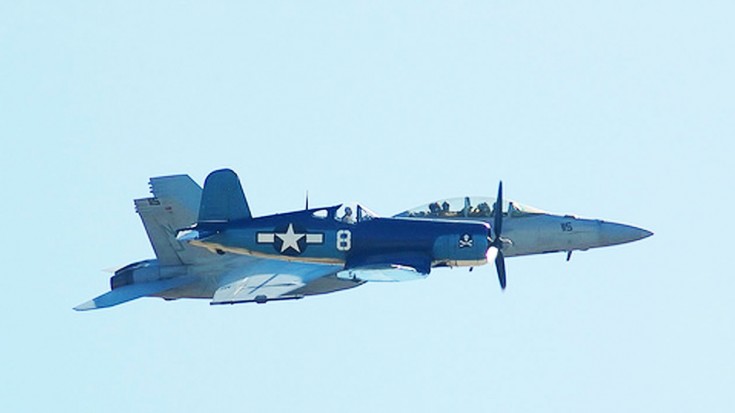 U.S. Navy Legacy Flight Of Past And Current Carrier Birds

Both of these fantastic warplanes were designed for the United States Navy and during their service have grown to be quite capable and versatile fighters and bombers. Although the Corsair had initial trouble with carrier landings because of its design, later variations fixed all the issues and many navy forces around the world adopted them. The Superhornet, quite a different animal, is also carrier capable and is the direct variant of the McDonnell Douglass F/A-18 Hornet.

Here are some stats at a glance:

Since both these birds are carrier capable, they were designed with folding wings. There are four different types: simple, aftword, double and rotating folds. Both the Corsair and the Superhornet are equipped with simple folding wings, meaning they fold straight up and over. This allows them to be easily stored on carriers, as the folded wings saved precious deck space.