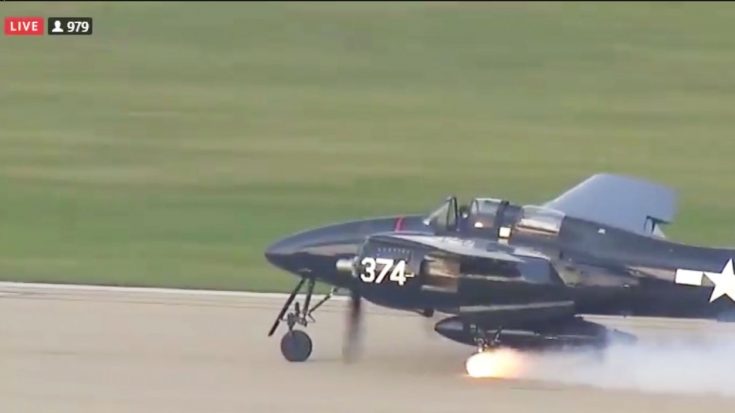 The most anticipated airshow of the year here in the United States just kicked off on Monday, July 23rd, 2018. EAA AirVenture at Oshkosh, WI,  hosts over 10,000 different aircraft attracting almost a half a million people from all over the world during its 6-day span. With all that commotion and traffic on the tarmac, things are bound to happen.

The first day was full of excitement, with everything from B-1 Lancers to vintage warbirds flying in for the meet (you can see the first videos and pictures here.) Although everything went according to plan, there was one edge of your seat incident which occurred.

After its demo, an F7F Tigercat, which was actually built during the war, coming in for a landing and blew a tire. Although it could have been bad, the pilot simply rode his aircraft to a stop, not breaking too hard and flipping the airframe. All in all, any landing you can walk away from is a good one.

We’ve covered this story earlier and you can read the full story here, but there was a pretty bad crash which happened in Texas on Saturday, July 21st. A C-47 Skytrain with 13 people onboard crashed during takeoff while on its way to Oshkosh. Everyone made it out ok as the aircraft only got a few feet off the ground but 8 people did need to be hospitalized.

The is a serious investigation underway to see what caused this priceless aircraft to crash and be a total loss.