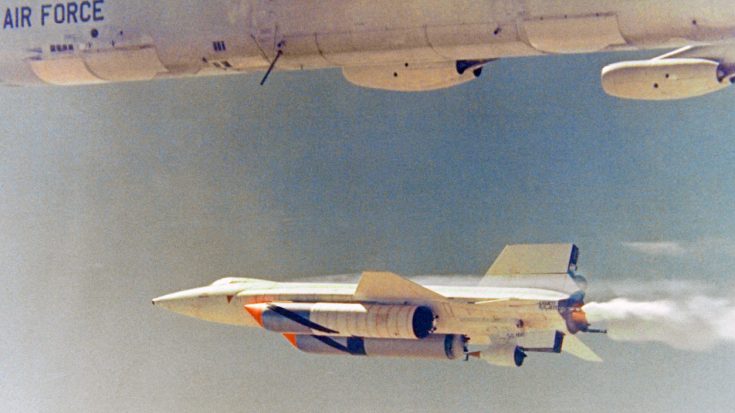 There are many aircraft first stretched their wings at Edwards Air Force Base where The X-15 program was conceptualized in the late 1950s and kept improving its design until 1968. In that time there were some wild rides on in the rocket that would later become known as the world’s fastest aircraft.

On October 3rd, 1967 Major William “Pete” Knight took the flight of his life into a modified X-15A-2 and made history. A B-52 Stratofortress hauled Knight’s X-15A-2 into the air and set off to do a speed test. The rocket engine ignited, consuming 12,000 lbs of fuel per minute and achieved the world record for fastest speed in a manned aircraft reaching Mach 6.72.

However, the troubles began when it reached the world record speed. The heat-resistant coating began to tear off and internal temperatures reached over 3000 degrees. A dummy ramjet ripped off of the aircraft and created a hole for heat to seep inside blasting Major Knight. Despite all that went wrong he still managed to bring down the X-15A-2 relatively intact with the exception of the burn marks.

The speeds reached by the X-15A-2 have never been surpassed by another manned aircraft, but not many are willing to risk their lives to break it. Now Edwards Air Force Base recently celebrated the 50th anniversary of the launch of the X-15A-2, you can see it documented in this clip.