This Is What Your Favorite WWII Bombers Would Cost Today 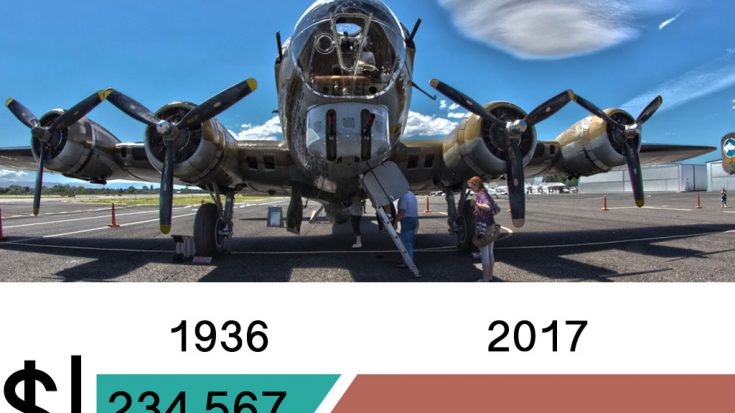 Here’s a fun one for you. In the era where new planes cost in the trillions with research and development taking decades, we were thinking about what World War II planes would cost nowadays. It’s not that we’re trying to prove something, we were just curious and guessed that you folks would be too.

In order to set up some sort of criteria for this conversion, we made the following baselines. For the sake of ease (if this works we’ll do others), we chose to estimate the prices of the top produced U.S. made World War II bombers. Also, the year we chose to convert the price from is the first year of production of each aircraft.

Now, we’re not economists nor statisticians, so we can’t explain why the discrepancies are so wide year to year. The reason we chose to make the first year of production the baseline is because the price of a B-17, for example, would have almost doubled if you calculated it in 1945 as opposed to 1939. Again, we’re not economists but the country was in the Great Depression and things were just not that normal. Also, production was shifted almost entirely to the war effort so we’re assuming that had a major effect on prices as well.

There are a ton of different factors that go into this, but what we used to make these inflation calculations is a simple tool provided by the government at data.bls.gov. It’s the best tool for crunching numbers like this and the closest you’ll ever get to something true. 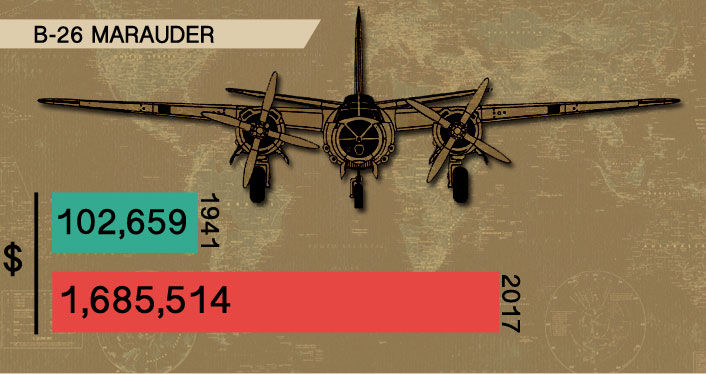 Let’s start with the Maurader. Not the most loved plane as it was difficult to handle, it did its part during World War II. Over 5,000 of them were made from 1941 to 1945 and they got their debut in the Pacific Theater. Later, limited amounts of them were sent over to the Mediterranean Theater and Western Europe.

Its nickname was the “Widowmaker” because many men were lost during takeoffs and landings as they needed to be flown exactly as instructed. If you didn’t, they stalled. 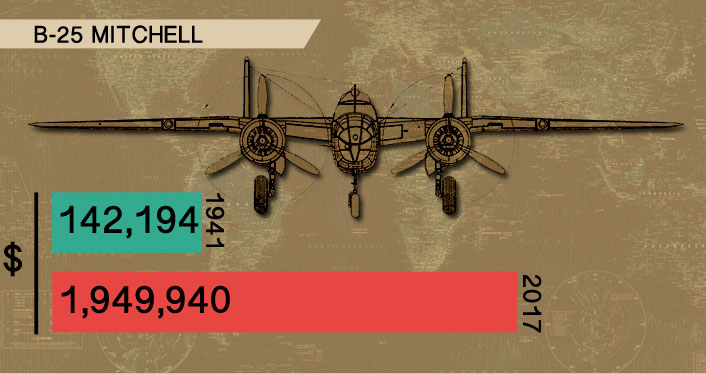 We’re sure you guys are no strangers to the great B-25 Mitchell. With just under 10,000 of them produced, they were cheap in comparison to the other bombers that did the same workload.

Mitchells fought in every theater of the war, most notably off of carrier decks during the Dolittle Raid. They were not made to do that, but they did. Read up on it if you don’t know what we’re talking about. 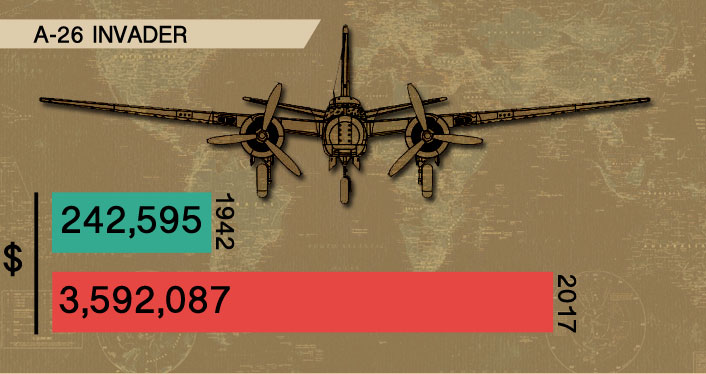 Much more expensive was this next plane, the Invader. Although designated A-26 as in “Attack” aircraft, this designation was only given to this plane because of the confusion people had with the B-26 Marauder we mentioned above. It was, in fact, a bomber but was produced in much smaller amounts. 2,452 to be exact.

Although it saw some service at the end of its production towards the tail end of World War II, these planes flew during the Cold War era conflicts as well and were finally retired in 1969 by the United States Air Force. 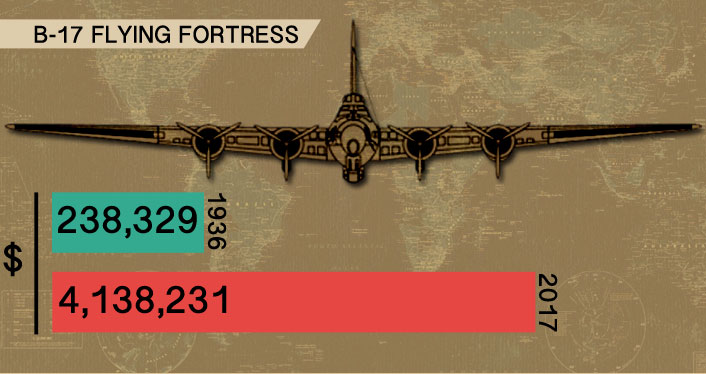 This girl needs no introduction. Many movies have been made about the crews of B-17 Flying Fortresses, so even folk who are not aviation fans know this plane. One of the earliest bombers to be produced for the war effort, 12, 731 of them rolled off the assembly lines between 1936 and 1945.

From Memphis Belle to good ol’ All American, there are countless stories of survival connected with this particular plane. Also, it was relatively cheap to make at the time. 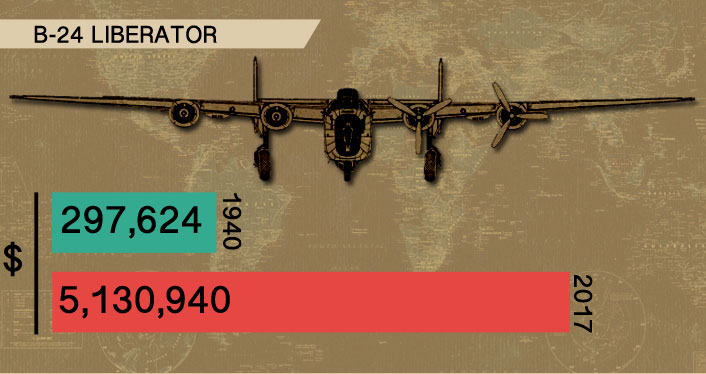 Designed by Consolidated Aircraft, people often don’t know that there were more B-24s built than B-17s. Although Flying Fortresses are always at the tip of everyone’s tongue as we mentioned above, there were 19, 256 Liberators produced from 1940 to 1945. Surprised? We were when we first found out.

Although you’d read in books that crews generally preferred the B-17s over B-24s, top brass liked the Liberators better as they could be adapted to many other roles. 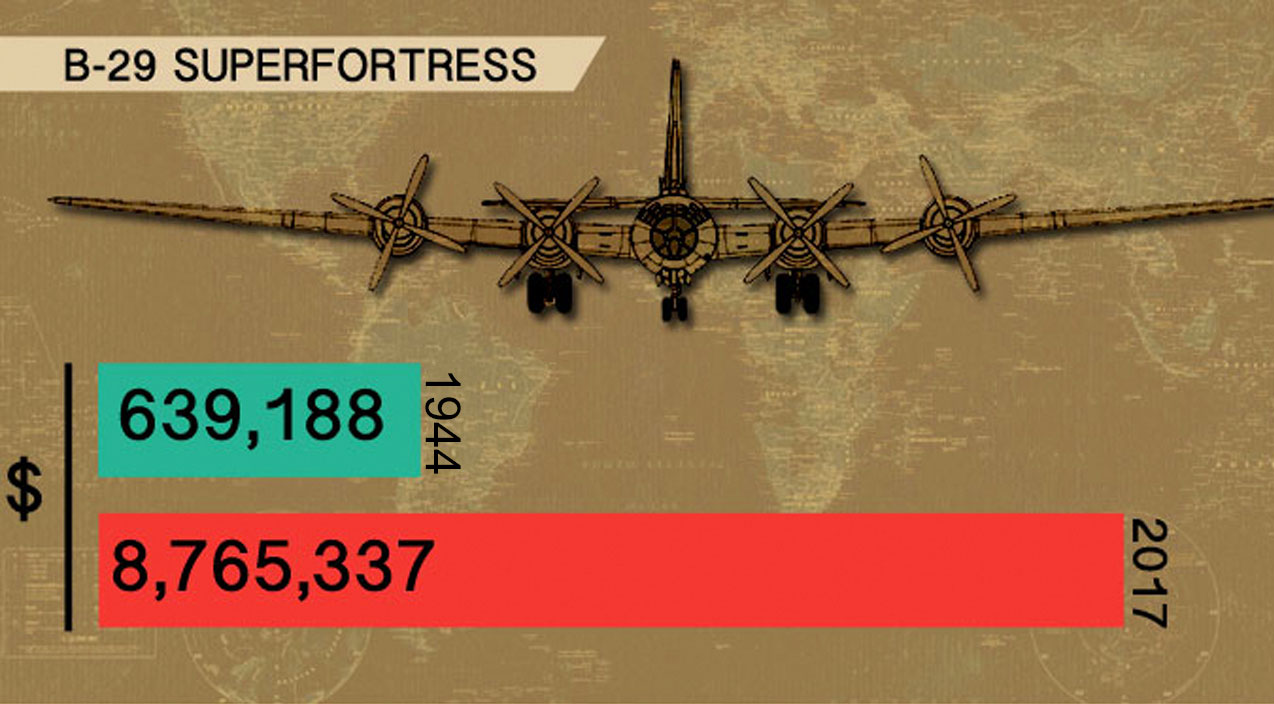 This one is the most expensive. The B-29 Superfortress. Another plane that doesn’t need much introduction, when you think of Atomic Bombs, you think of Enola Gay, or, at least you know they were dropped by Superfortresses. 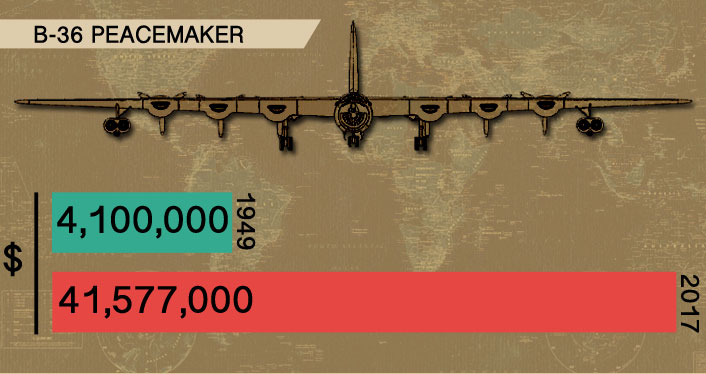 This big girl doesn’t really belong on this list as she was built four years after the war, but the B-36 Peacemaker holds a special place in our hearts. Although built that long ago, she is the biggest bomber ever built by the United States (taking into account the wingspan).

Capable of carrying nuclear weapons as well, the Peacemaker could haul up to 87,200 lbs. of ordnance using its 6 propellers and 4 jet engines. Also, she cost a lot of money.

Let us know if you liked this little infographic we made. If you found it informative, we’d love to do others for European planes, fighter planes and so on.  If you have other ideas too, just drop us a line on Facebook and we’ll make it happen. Thanks!