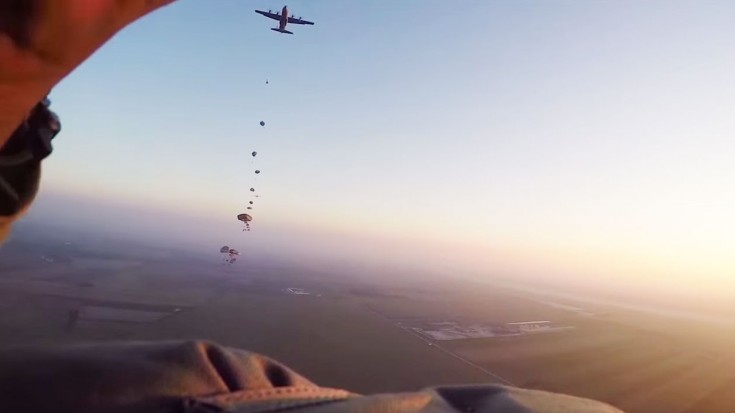 This Is Pretty Great.

Whether you jumped out of a C-47 during World War II or a C-130 nowadays, the feeling of skydiving is the same. Thrilling, beautiful and a for some a bit nerve wrecking. It goes without saying but we’ll exclude the paratroopers which were heading into D-Day, as that was a whole different story and may all those lost rest in peace.

When it comes to standard drop-ins however, they could be quite pleasant. Of course it’s not for everyone, but when you see this video, you might get a different perspective of the jump.

C-130 Hercules are military transport aircraft still in use today and are often considered the grandsons of C-47 Skytrains which were used during World War II.

Using a body mounted camera, a U.S. Army jumpmaster was conducting airborne operations during a sunset. Standing at the door, he directs all his men and watches them exit the plane. Everything looks nice and organized and goes according to plan.

Then, it’s his turn. He approaches the door and you see that the suns is setting. With this beautiful scenario in the background, he jumps and his parachute deploys as it should and then you’re in for one beautiful ride down. Aside from the picturesque setting, it’s also mesmerizing to see hundreds of other paratroopers slowly gliding through the air behind him, with C-130s passing above them as they return to base.