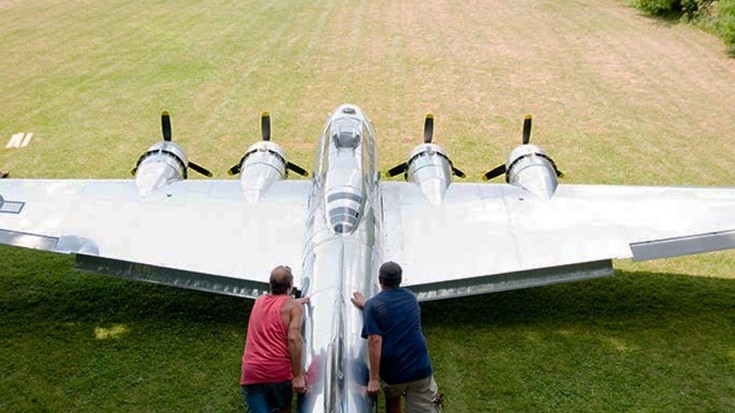 This Is The Greatest Thing Since The B-17 Itself!

In order to have the nacelles to scale, the radial engines that would produce enough power would be too big. For this reason he went with Hirth 3002 4-cylinder 2-stroke engines. They produce 60hp so obviously the whole unit gives out 240. That’s enough power for someone to take a seat in and take off!

Jack didn’t write down his hours, but roughly calculating it out he says he probably spent 25,000 hours on this thing in the past 15 years.

At the bottom of this post you’ll find a link to Jack’s website which most of you would want to visit. He catalogued and took pictures of the progress over the past 15 years, so you can see the whole thing come to life. Also, we recommend seeing the “media” page. The video you’ll see on our site is the overview of the entire build, but on his site he has an interview with the local news. It’s a video that we can’t show you here so go check it out on his site.

Also, as he’ll mention himself, this thing will be ready to fly next year. We’ll stay on top of this for you and let you know as soon as those wheels leave the ground!

Here’s his site if you want to venture out there: http://theballybomber.com/videos.html