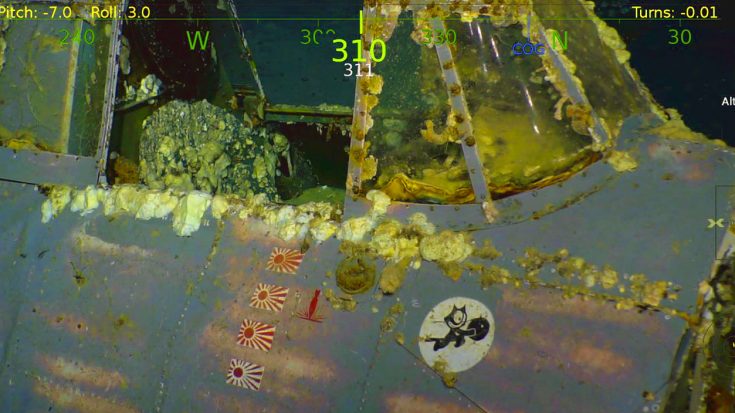 Recently it was announced that Microsoft co-founder Paul Allan’s latest expedition has successfully discovered the remains of the USS Lexington. Details were scarce at first but more information is beginning to trickle out from the site of the wreck. Now the submersible crew has found images of the aircraft stationed onboard the sunken carrier.

Lady Lex as she was known was among the first aircraft carriers built by the US Navy. The vessel carried 35 aircraft including F4F-3 Wildcats, Douglas SBD Dauntless and Douglas TBD-1 Devastators when it was sunk by Japanese airstrikes. The Research Vessel Petrel has begun to find remains of a some of the aircraft that sank with the USS Lexington.

“Lady Lex” went down with 35 planes. So far, #RVPetrel has found 11 of them. Here’s a look at two Douglas TBD-1 Devastators, resting on top of each other, and a close up of a Grumman F4F-3 Wildcat. https://t.co/19CuqvopwB pic.twitter.com/FEWZYD0iEo

“As the son of a survivor of the USS Lexington, I offer my congratulations to Paul Allen and the expedition crew of Research Vessel (R/V) Petrel for locating the ‘Lady Lex,’ sunk nearly 76 years ago at the Battle of Coral Sea.”

This discovery will no doubt provide some closure to next of kin lost in the devastating attack. More details will emerge as the exploration continues its efforts and film of the findings can be seen in this clip.