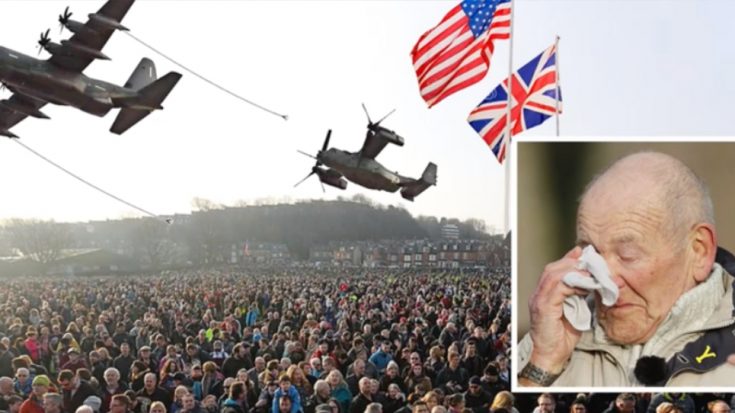 On February 22, 1944, a B-17 bomber came roaring over Endcliffe Park in Sheffield. The aircraft was badly damaged and the single field they found there was a life-saving landing spot.

Except that Tony Foulds, then 8 years old, was standing there. The pilot made a snap decision; after attempting to wave the stunned boy away, he pulled up.

It was a decision that saved Tony’s life. But it cost the crew of 10 theirs as they crashed into the trees just beyond the field.

“It’s more than bravery. It saved me. If they’d have thought of themselves, which they didn’t, they could have landed on me.” – Tony Foulds

And that’s what the morning of February 22, 2019 was all about. As the day broke, thousands poured into Endcliffe Park after learning in January that Tony had dedicated the last 75 years of his life to looking after the airmens’ memorial.

His greatest wish was a flypast to honor the crew of “Mi Amigo.” He learned, while on air, that his wish would be granted in a big way.

The flypast that took place was one for the books. Joining Tony Foulds were family members of the downed men that the lovable caretaker considers as family of his own. They watched in awe as first a Douglas DC-3 Dakota, then F-15E Strike Eagles, a Typhoon, MC-130J Commando, and a CV22 filled the sky above. A Missing Man formation ripped the crowd’s hearts right out.

Finally, Tony’s wish has been granted. The flypast could not have been any more perfect. Though he blames himself for their tragic loss, the crew of “Mi Amigo” could not have saved a more grateful, honorable man than Tony.

Many thanks to all involved for bringing this beautiful story to the world!

See the video below taken live this morning at Sheffield Park.