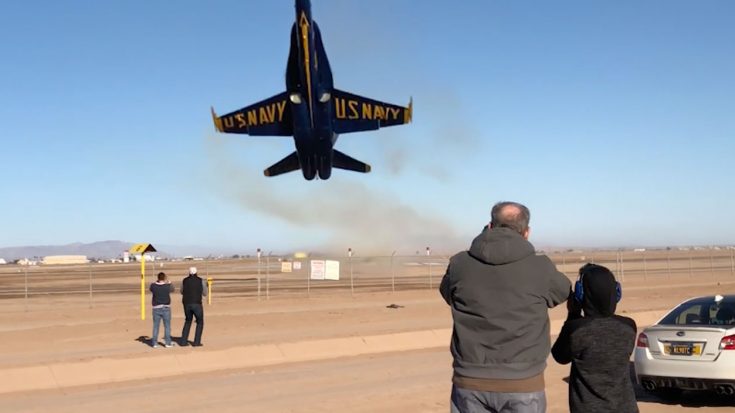 Almost everyone who follows us here at World War Wings knows who the Blue Angels are. Fighters. Aviators. The best of the best. We’ve seen plenty of incredible videos from them over the years, but never something like this. We feel like it’d be a first for many of you as well.

The folks in this video set themselves up in a really awesome spot right behind the fence where the runway ends. With one of the Blues coming straight at them, they knew that there would be a high G-pull to a vertical climb right after the landing gear retracts and that’s exactly what they got. The jet was as close as we’ve ever seen it to anyone who’s not a part of an airshow, and as you can imagine, the jet wash roughed them up a little too.

From what we gathered, this was not an airshow but rather the winter practice session the Blue Angels perform on a daily basis. Getting ready for the full season, we figure a couple of special people got to see them practice and do it from a place not many others can get to.

All in all, this is one of the coolest aviation videos we’ve seen in a while.