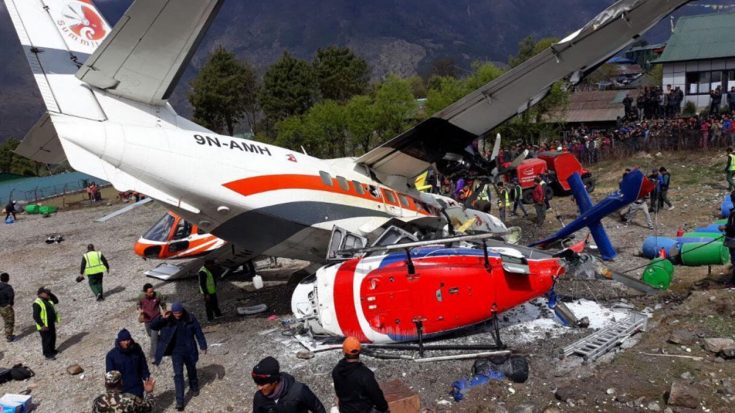 On April 14th, 2019, a Summit Air 9N-AMH departing Lukla Airport in Nepal veered off the runway and crashed into a stationary helicopter nearby. A CCTV camera caught the entire incident and has been passed to the local authorities to use in the investigation of the crash.

? Runway excursion on takeoff and collision with two helicopters

The A/C veered off the runway, collided with a helicopter destroying the helicopter and came to a stop after colliding with a second helicopter=
(via #AVHerald) pic.twitter.com/6gfIk5eUj5

According to the latest reports, the small twin-engined propeller L-410 Turbolet, made for short landing and takeoff, was ramping up for takeoff but after mere seconds lost control and hit the helicopter. It is said the pilot survived but the co-pilot and two people on the ground did not.

“Our first priority now is the well-being of the injured persons and family members of those affected by this unfortunate accident,” said the airport’s director during an interview.

Although it’ll be months before the investigation is concluded, Lukla Airport is hailed to be one of the most dangerous in the world.

There are multiple factors contributing to the dangers of this airport. The tarmac is located at an elevation of 9,334 ft and in a mountainous region, so frequent rain, fog and high winds drafting between valleys make landing and takeoff a nightmare.

In addition to the above-mentioned hazards, this runway is extremely short. 1,729 ft. long to be exact. Although all these factors are dangerous, what makes it even worse is that the runway ends with a 700 ft. drop.

This is the airport Mount Everest climbers come in to in order to start their trek.

If the departing plane doesn’t reach liftoff speed, there is nothing to stop it from going over. Reversely, on approach, a plane has hit the hill because of cloud cover, so either way, this is one tricky airstrip.