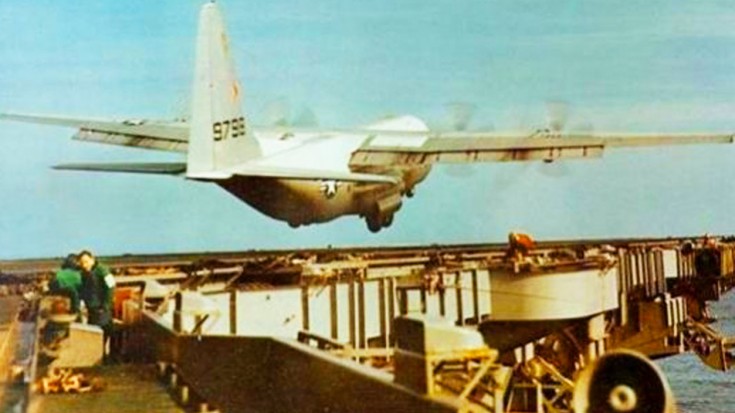 This Is Extremely Impressive.

In 1963, a Hercules crew made history by testing and then absolutely nailing a carrier landing and takeoff. During that time, the United States Marine Corps loaned one of their KC-130sFs to the U.S. Naval Test Center to check their ability to land on carriers. At that point, it was the biggest plane attempting to do so.

This Hercules still holds the world record for the largest and heaviest plane to land on a carrier.

In need of a plane for COD (Carrier Onboard Delivery,) the incredibly minimal takeoff speed of the Hercules made them a viable option. During the tests, the crew performed 29 touch-and-go landings. Then, it was time for the real deal.

Starting at 85,000 lbs. and ending with 121,000 lbs., the crew managed to perform 21 un-arrested full-stops and the same amount of takeoffs. They didn’t use a catapult nor an arresting hook. For this reason, this plane was adequately named “Look Ma, No Hook.”

This video shows the trails which in retrospect look pretty routine. What you need to imagine though is the crew’s first attempt. It has never been done before and it was the largest, heaviest plane every to try it. Can’t even imagine what was going through the crew’s heads on the first attempt to come to a full stop. Respect!