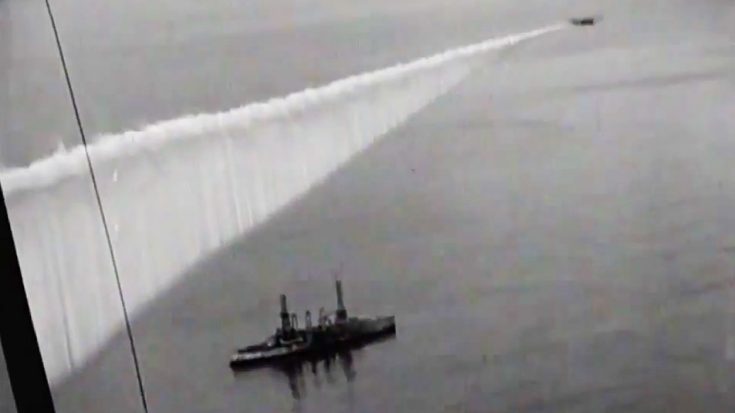 This is one of the neatest pieces of historical footage we found in a while (actually, my wife found it). Although we are well aware of the tactic as smoke grenades and other shielding devices have been used by the military for decades, we didn’t know that it was first done by planes and by the look of it, as early as the 1920s.

The video opens up with the statement, “to protect the bombing plane the Air Service can lay a smoke curtain.” Then you’ll see personnel charging up some canisters and putting them into what looks like a drop tank. The plane is then ready to take off and lay down the curtain.

This strategy could also be effectively used to shield ships while changing positions or retreating.

Although the video description did not give any indication as to where and when this was taken, the battleship and plane look like they belong in the 20s or 30s. As for what they used, we can only speculate it was titanium tetrachloride.

Colorless and non-flammable, it crystallizes once it hits damp air and becomes dense and heavy. The compound which you’ll see in this video seems like it behaved in that particular way to, hence our theory.

If any of you folks have any more info about this video, shoot us a message via Facebook. We’d appreciate it.