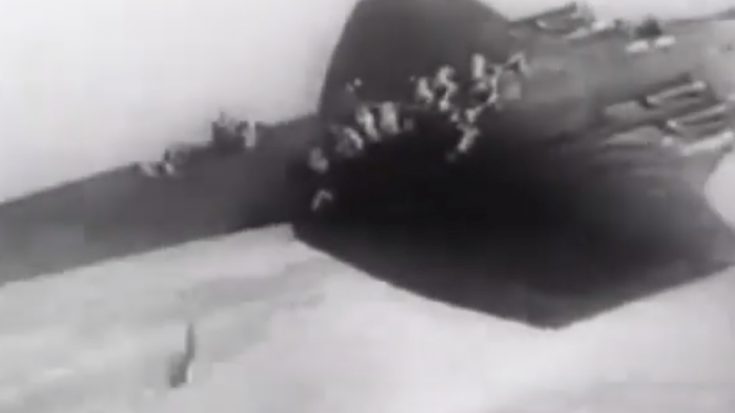 The view from below the Topalev TB-3s and the descending paratroopers. | Flyr / YouTube

Like tiny seahorses being born, Soviet paratroopers emerge from the insides of the Tupolev TB-3 in this 1937 footage. They carefully support themselves as they step single-file along the massive Tupolev TB-3s. Then they simply slide right off. It’s an incredible sight to see these paratoopers topple off the wings.

The first Soviet parachute jump dates back to August 2, 1930 in the Moscow Military District. Eventually, the Russian Airborne Troops (or VDN for “Vozdushno-desantnye voyska Rossii”) was created. Incredibly, these forces would take part in every conflict on Soviet territory.

For the most part, Soviet paratroopers would act as foot infantry, but there were two especially significant operations – the Vyazma operation in February of 1942 with the 4th Airborne Corps and the Dnepr/ Kieve Operation in September 1943.

Unfortunately, both operations resulted in the loss of many paratroopers. While the Germans praised the Soviet paratroopers for their tenacity, Vyazma and Dnepr/Kiev were failures not to be repeated.

The Tupolev TB-3 bomber was the world’s first cantilever winged four engine heavy bomber. The all metal plane was officially withdrawn in 1939. However, it still saw heavy use, especially as a cargo and paratroop transporter. In fact, the Tupolev TB-3 actually made up a quarter of the Soviet bomber strength. It may have been outdated, but the Soviet Union made it work. They kind of had to.

Check out this otherworldly footage of these brave paratroopers sliding down the aircraft.