Footage Of The First Helicopter Lifting Off- The Fw 61 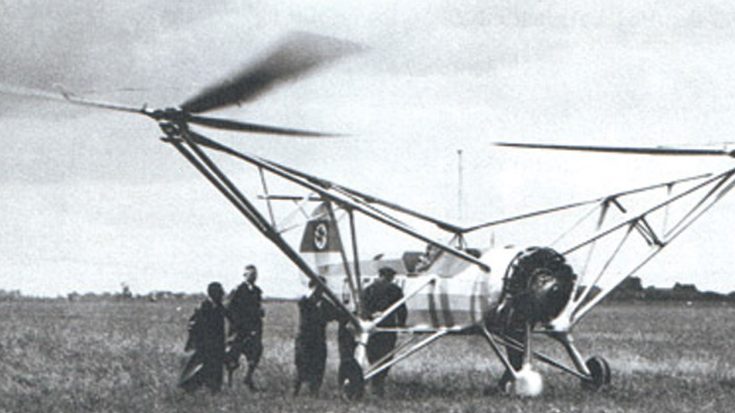 K.Munson "Helicopters And Other Rotorcraft Since 1907"

Before That, There Was No Such Thing As A Helicopter.

Germans have accomplished many feats of engineering, but what we didn’t know is that Focke Wolf, the creators of the famous Fw-190, were also behind the world’s first operational helicopter.

Although the idea was floating around for a long time, no one was crazy enough to make an aircraft that could safely take off vertically and then transition to horizontal flight. Well, they did.

Meet the Fw-61, “the first practical, functional helicopter.” At that point, it was basically the fuselage of an already existing Fw 44 Stieglitz which first took flight in 1932. Strapping two autogyros to it, it was first proven to fly on June 26rh, 1936.

On that day it broke the following records:

This was of course pretty easy to do as the only other “helicopter” to take off and move a bit was the TsAGI 1-EA from Russia, but  those statistics were not exactly official. The Fw 61 had a documented trial of reaching 11,243 feet and flying straight for 143 miles.

Although this was just a proof of concept, further testing made the idea of a helicopter sound and a transport version was requested. This lead to the development of the Focke-Achgelis Fa 223 (see above), capable of hauling 2,200 lbs. of cargo.