For Anyone Who Loves Thunderbolts, This Video Is Definitely For You 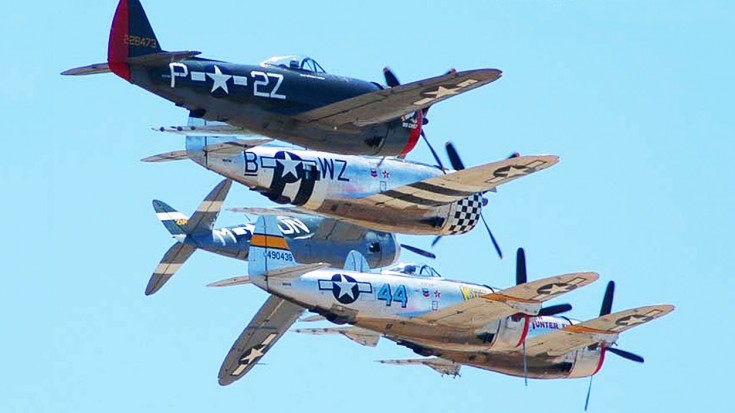 Not One Or Even Two, But Six Thunderbolts Startup And Hit The Skies!

This is a treat for any World War II warbird enthusiast, but if you’re a big P-47 fan, well, this might be as good as it gets nowadays. During the Planes of Fame Museum Airshow in 2005, these five wonderfully sounding warbirds flew in formation, a sight that was not so great if you were the enemy during World War II! You’ll also get a glimpse of No Guts, No Glory! towards the end of the video, a beautiful machine to say the least.

P-47 Thunderbolts, which were often referred to as Jugs because of their appearance, were built by the American company Republic Aviation. Fast, rugged and able to drop 2,500 lbs. of bombs, they quickly became fighter pilot’s favorite planes. During the course of 4 years, over 15,000 Jugs were made, as they were also shipped of to serve in France, Russia and Britain. Able to carry half the payload of a B-17 bomber, these planes were also equipped with four M2 Browning machine guns on each wing. Able to make quick strafing runs on enemy ground forces, these war machines were quite a force to we reckoned with.