A 13th Corsair Has Been Added To Upcoming Airshow 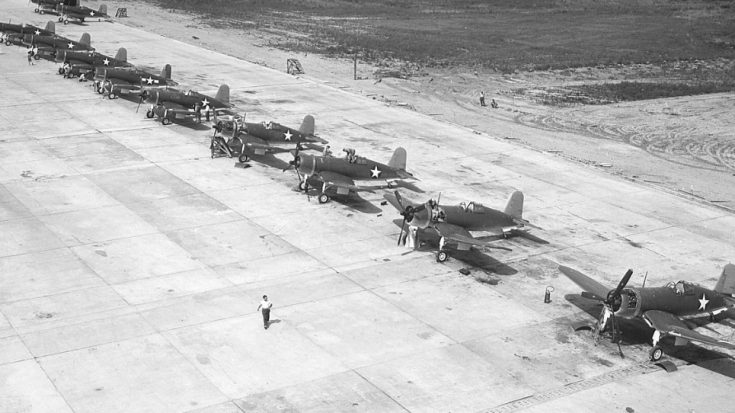 Looks like a Corsair family reunion is about to commence! The Thunder Over Michigan air show in Ypsilanti, Michigan just confirmed its 13th participating Corsair: Vintage Wings of Canada’s magnificent FG-1D Corsair Bu.92106. If you’re a Corsair fan, mark your calendar for the weekend of August 3. Something like this hasn’t happened at least since the 1960s! And who knows if it will happen again.

A night fighter built for Argentina, Bu.121881 spent over 3 decades in service and on display in South America before being purchased by Lone Star Flight Museum.  She was restored by Ezell Aviation in Breckenridge, TX and painted as Annie Mo, the Corsair of  Lt. Guy Bordelon, the Navy’s only ace.

This Corsair is a rare variant from the last of the 94 built in 1952 exclusively for the French Navy. She fought in the Indo-China War, the Suez Canal War, and the Algerian War. When she was retired in 1963, she had 3 bullet holes and firewall damage that needed repair. In 1994, she got a slick new paint job in honor of Jesse Brown, Naval Aviator, the first African-American killed in the Korean War.

Meet Alberta Blue! Another French Corsair, she was likely involved in conflicts in Indochina, Egypt, and Algeria. Alberta Blue was one of the Corsairs on the set of Baa Baa Black Sheep with John Schafhuasen as her pilot.

This is one of 568 F4U-5s built. That particular model switched to the duel-supercharged version of the R-2800 engine, good for 2,450 horsepower. Heck yeah!

Manufactured in 1947, 123168 spent some time in Honduras. She flew combat missions during the 1969 “Soccer War” between Honduras and El Salvador before being grounded in 1978 and restored in 1987.

Built by Goodyear, “31” was purchased surplus in 1958 for use in a wind machine to test glass wall panels for high rise buildings. That’s an odd job for a vintage war plane! Before that, this war veteran flew in the southern Philippines in July and August 1945.

This is the second to last Corsair built in the Stratford Plant in Connecticut. Salvaged from Honduras by Earl Ware in 1981, she passed through a few more hands to get to where she is today!

The Commemorative Air Force’s Goodyear Corsair is a very special plane, despite never having seen combat. She’s one of the busiest of the CAF’s aircraft. In 2001, she was painted as #530 to represent 1st. LT. MO Chance.

The Collings Foundation Corsair flew 77 combat hours over North Korea between 1951 and 1952 with most of her service done as a night fighter. After the risky tour, she served aboard the USS Leyte, the USS Tarawa, and the USS Boxer until she was taken off of naval inventory in 1956.

Louis Horchel’s Corsair shipped from the U.S. to New Zealand on April 29, 1945 aboard the USS Benjamin William and served with the No. 14 and No.17 squadrons. She was rescued from the Rukuhia aircraft graveyard in 1972. With a few spare parts from other planes, today she flies beautifully.

“Marine’s Dream” is extra pretty with a paint job not quite like any of the others! She’s the product of a mid- 1990’s project, making her way up from a sad hunk with missing parts to what she is today. Recognizing her potential, many businesses donated service and materials for her top notch reconstruction. She flies with a Pratt & Whitney R- 2800-79 and is marked in honor of Marine Corps Corsair Ace Captain Ken Walsh.