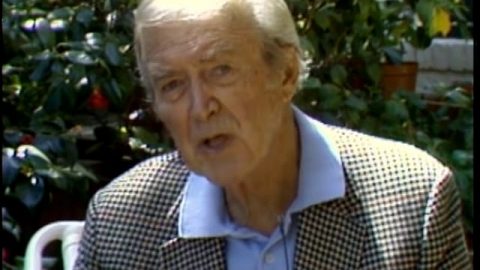 Jimmy Stewart is the first American movie star to enlist and fight for the US Army during WWII. After serving in the military, he returned to acting and starred in It’s a Wonderful Life (1946) a post-war film nominated for five Academy awards.

In the video, an older Stewart tells a joke about a wife asking her husband if he would remarry if she dies. Bewildered, he immediately tells her no, he wouldn’t.

The wife kept on prodding him- would he sell the house? How about their bed? The husband’s answer remains unchanged. No, he wouldn’t, he repeated.

Finally, the wife remarked, “you certainly wouldn’t let her touch my golf clubs.”

This time, though, she wasn’t prepared for was her husband’s answer.

Do you think Jimmy Stewart’s jokes are a class act? Let us know in the comments!