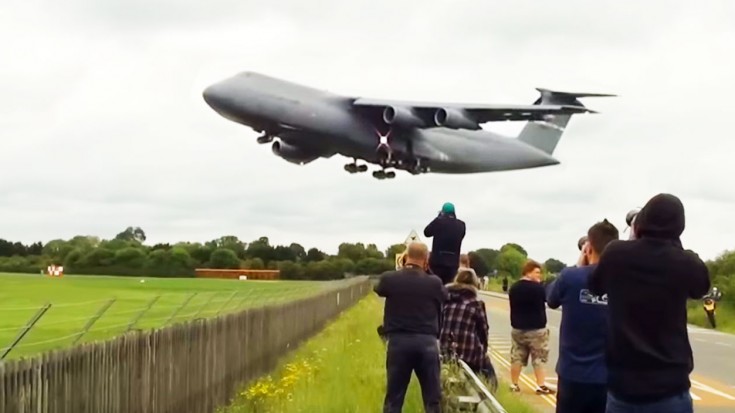 Pretty Eerie Sounding, That’s For Sure.

The C-5 Galaxy is a behemoth of a plane, able to haul a payload of 270,000 lbs. using its four General Electric TF39-GE-1C engines that were just upgraded to. Built by Lockheed, they first took flight in 1968 and were introduced into the United States Air Force in 1970.

These planes faced many troubles at first, the most significant being the cracking of the wings when they were put into use. Lockheed had to remedy the problem which put them at a financial disadvantage, however, the new and improvd C-5M Super Galaxy was invented which is the plane you’ll see here.

Super Galaxies have upgraded engines which we mentioned above, as well as modernized avionics, safety equipment, skin and frame as well as landing gear. With all these changes and upgrades, their service life has been extended past the year 2040.

As for the engines that you’ll be able to hear clearly at the end of this video, they’ve been upgraded as well. They’re much more efficient now, producing 22% more thrust per engine, allowing them to make a 30% shorter takeoff while being able to carry more load.

It’s one massive beast and looking at it is terrifying and kind of overwhelming. Watching them fly over must be quite an experience – it’s like witnessing greatness before your very eyes. And the screaming engines? There’s nothing quite like listening to it. That’s our kind of music.

“Quite frankly, the C-5 program was a great contribution to commercial aviation. We’ll never get credit for it, but we incentivized that industry by developing [the TF39] engine.” – General Duane H. Cassidy, former MAC Commander in Chief

Although they do sound different than their previous engines, those thrust reversers still sound eerie. Wait till the end when the Super Galaxy approaches and tell us we’re wrong.