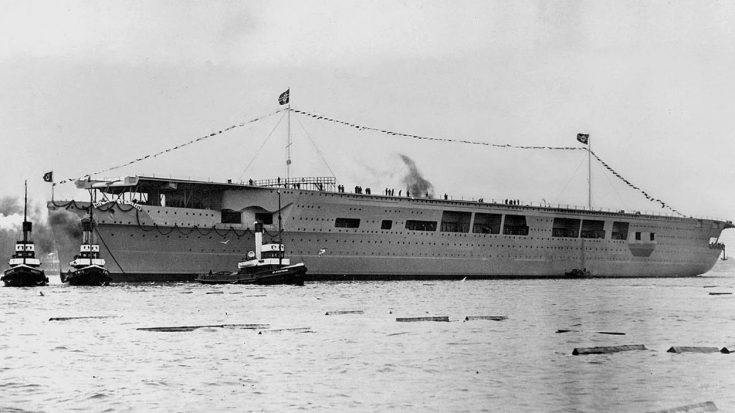 The German Kriegsmarine developed several massive battleships for use during WWII, but they were outdated by the time of their launch. Instead, it was found that aircraft carriers were far more effective for combat missions by simply dispatching planes to do the fighting. The Germans did actually have an aircraft carrier called the Graf Zeppelin. This massive carrier could have been a major game changer for the Germans during WWII but it debuted before it was completed.

Launched in December 1938 the Graf Zeppelin was the biggest ship in the German Kriegsmarine with a length of 861 feet, 71 feet longer than the Bismarck. Unlike previous carriers which were simply converted ships with landing platforms install, the Graf Zepplin was built to be a fully functional aircraft carrier. It ultimately was put off as a side project due to lack of anti-aircraft guns as well as capital ships and submarines taking a larger focus for Nazi Germany.

“By 1940, the carrier, now christened the Graf Zeppelin, was still not yet ready for service — a shortage of anti-aircraft guns kept her in the shipyards. With Kiel in range of British bombers, the enormous vessel was towed to Gotenhafen in the summer of 1940, where she would continue to sit idle for two more years.”

Germany felt they had bigger fish to fry and concentrated their resources on other military projects rather than the big carrier. Due to the lack of anti-aircraft guns, the Graf Zeppelin found itself to be easy prey for Allied bombers in the later part of the war. There are several other problems that led to the Graf Zeppelin to be pushed off as a side project that can be viewed in this clip from Military History Visualized.