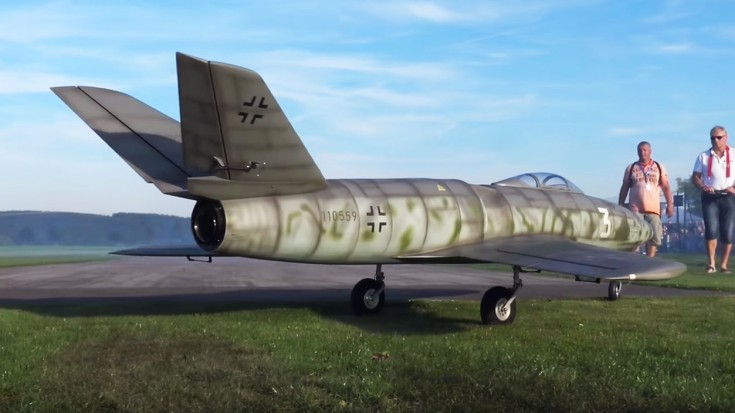 Although This Awesome Plane Never Came To Be, We Can At Least Enjoy This.

As part of the Jägernotprogramm, or Emergency Fighter Program, the third Reich began to conceptualize their next generation high-altitude jet powered interceptor. Conceived in 1945 right before World War II ended, this fighter was designed as a deterrent to the constant Allied bombing raids. As the Axis war effort weakened, a new type of fighter was needed to shoot down incoming bombers as swiftly as possible. Although never produced, this design was ahead of its time and lucky for us, an Rc aviation enthusiast put together this massive plane for us to marvel at.

Here are some facts about this Rc:

Drafted, designed and built by at least four people out of Germany, this P.1110 took 2 years to complete. The mastermind behind the project is Roland Maier who you’ll see flying it in the video. As you’ll be able to quickly tell, this probably isn’t his first time flying an Rc. Towards the end, his jet hits some crosswind and sways a bit, but Maier put his baby down on the grass as gently as ever. Overall, this is the next best thing to having an real airworthy example of this wonder of engineering.