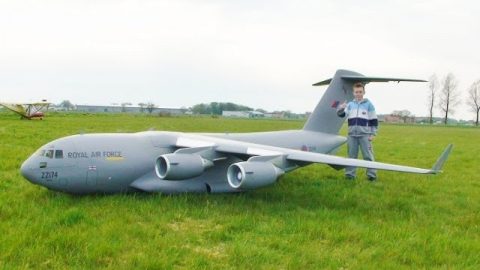 One Of The Biggest

Colin Strauss’ massive C17 Globemaster was ahead of its time. The C-17’s wingspan could almost reach 21ft long – an absurd measurement for a remote-controlled aircraft!

To proportionate its wingspan, the Globemaster’s total length was around 20ft long and was taller than the average man, being 6ft tall on the tail. Moreover, the RC aircraft could store 2.75 gallons of 95% kerosene and 5% turbine oil.

The plane was built mainly from balsa and ply, with glass and carbon fiber moldings to reduce weight. Nevertheless, it still had a take-off weight of 265lbs, which its four P120 turbine engines could support.

The model took about 12 months to design and build; and was made by a team from the television series, Supermodels. At its time, it was one of the largest jet models in the whole world.