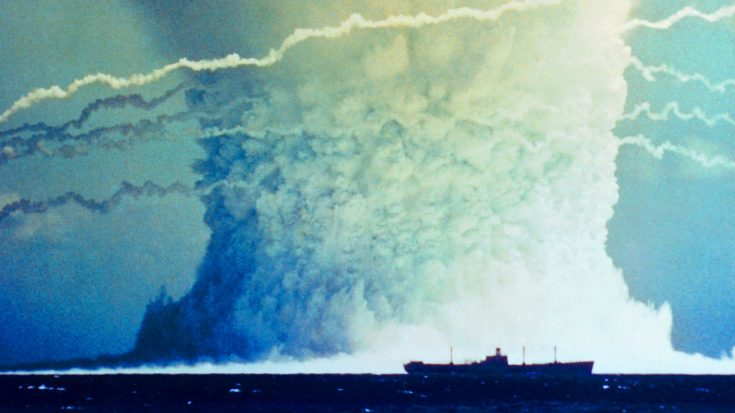 The year is 1958 and the United States military is in a tense race against Russia for supremacy over nuclear weapons. Huge bombs of all kinds were tested in areas around the South Pacific in order to learn their effects and to push their destructive limits.

Submerged 150 feet down in the lagoon of Eniwetok, the United States Military was set to detonate an underwater nuclear weapon. Better known as Umbrella, this test was part of Operation Hardtack a series of weapons tests in the Pacific Proving Grounds. Several naval vessels were present at this detonation in order to assess the impact of underwater explosions on large warships. Other tests were set up to study wave size, effects of radiation and seismic impact.

The detonation that took place at that calm lagoon soon became known as the Tsunami Bomb. A giant column of sea water bolting up into the sky and crashing down over as it dwarfs the huge warships. Witness the Umbrella bomb in its full glory, captured from several different angles in the amazing clip.